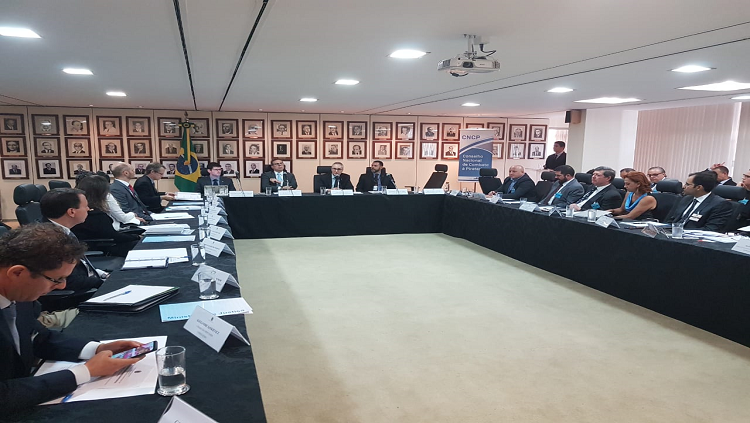 The National Council for Combating Piracy and Intellectual Property Offenses (CNCP) met on Wednesday (27) to resume the work of the collegiate.

The National Council for Combating Piracy and Intellectual Property Offenses (CNCP) met on Wednesday (27) to resume the work of the collegiate. Secretary Luciano Timm, who is in charge of the National Consumer Secretariat of the Ministry of Justice and Public Security (Senacon), sworn in the new advisory and collaborating members of the Council for the 2019/2021 management, including government agencies and the private sector. , who directly suffer the impacts of piracy, smuggling and embezzlement.

On the occasion, a brief presentation was made of the work already carried out by the Special Commissions in progress, the issues involving technical contributions and suggestions from several members of the Council. There were still the approval of the Creation of the Special Cigarette Commission, which will have the rapporteurship divided among the Members: National Forum against Piracy and Illegality, represented by Edson Vismona, who is president of the Brazilian Institute of Ethical Competition - ETCO, and Newton Vieira, from Brand Protection Group. The Special Commissions in progress are: E-Commerce, Online Advertising and Payment Methods and Hardware.

The meeting allowed the exchange and exhibition of successful experiences, as well as the forwarding of concrete and strategic actions to combat piracy in the country and the discussion on the sale of products originating from crime on digital platforms. Edson Vismona presented the panorama of piracy in Brazil and the efforts aligned with the Ministry of Foreign Affairs for actions within the scope of Mercosur and OECD.

CNCP's entry into the Collaborators Panel of the Secretariat of Integrated Operations of the Ministry of Justice and Public Security - SEOPI was announced, with the objective of assisting the approach with Public Security agents in the formatting of operations to combat piracy and crimes correlates. The Collaborative Panel also joins the Special Advisory on Legislative Affairs of the Ministry of Justice and Public Security - AEAL, aiming to assist in the follow-up of legislative proposals related to the themes of combating piracy and crimes against intellectual property.

In addition to the debates, the Council endorsed the dates for the 2019 regular meetings and some points for changing its bylaws. Another topic addressed was the calendar of the National Piracy Combat Award, scheduled for the second half of this year.

CNCP is a collegiate and advisory body, part of the basic structure of the Ministry of Justice and Public Security. Its purpose is to prepare guidelines for the formulation and proposition of the National Plan to Combat Piracy, and the tax evasion resulting from it, in addition to crimes against intellectual property. It is composed of representatives from different public bodies and sectors of civil society.