20 states and DF raise ICMS in the country; see which taxes have increased 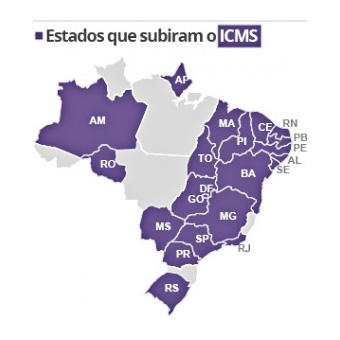 Inflation will not be the only villain in taxpayers' pocket in 2016. With losses in revenue, the federal government and most states and capitals raised their main taxes, according to a survey carried out by the G1.

The survey considered only the rate increases - the percentage used to calculate how much the taxpayer will pay in tax on the value, in reais, of a certain product, service or asset.

They were left out, which reflect only the effects of inflation on the prices of products or services - a 10% tax on a product, for example, which cost R $ 100 a year ago, would then bring R $ 10 to the government coffers. That same product, costing R $ 110, would now pay R $ 11 in taxes, without changing the rate.

In the case of property taxes, such as IPVA (incident on vehicles) and IPTU (on real estate), in many cases there was no change in the rates, but with the correction of the value of these assets (due to inflation or devaluation), the final value of the taxes changed.

Main taxes
The rate of the Tax on Circulation of Goods and Services (ICMS), for example, increased in 20 states, in addition to the Federal District. The state tax is one of those that weigh the most and focuses on products and services considered essential, such as telephony and telecommunications, and also superfluous ones, such as cosmetics, alcoholic beverages and cigarettes.