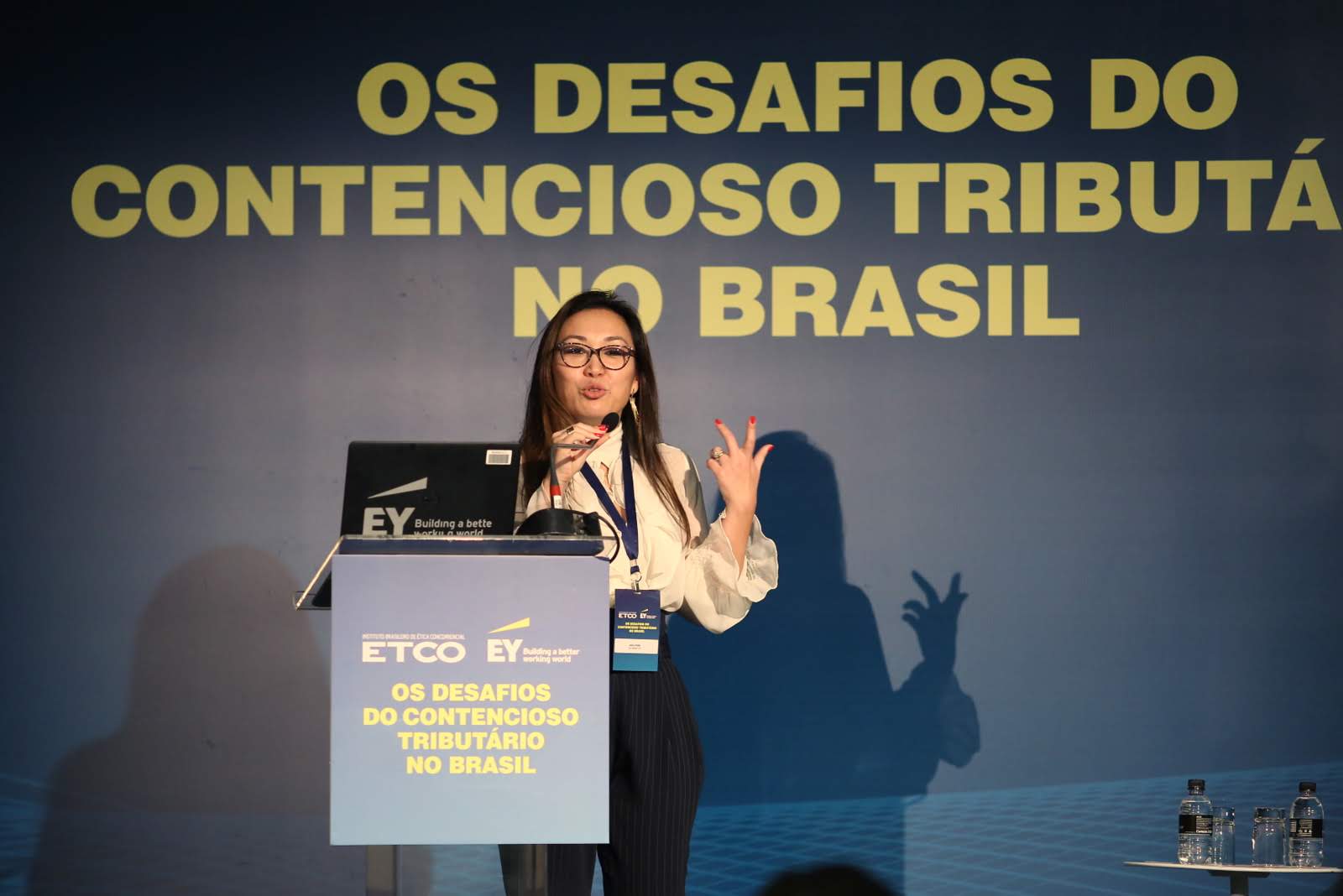 Erica Perin, partner of EY, at the presentation of the study (photo: Mário Bock)

The Brazilian Tax Litigation Challenges study was carried out by EY. The consultancy company gathered and analyzed data from several federal government and justice agencies, in addition to research on the topic produced by other institutions. It also involved EY teams in six countries chosen to analyze litigation solution models: Germany, Australia, United States, India, Mexico and Portugal.
The work was carried out by the managers Nátalie Branco and Gidelle Niemann, under the coordination of the EY partner responsible for the tax area, Érica Perin. Following are six highlights of the study:

1. Litigation / GDP ratio keeps growing
The Union's contentious tax credit stock, comprising tax credit from the Federal Revenue of Brazil (RFB) and the Attorney General's Office of the National Treasury (PGFN), has been growing both in absolute terms and in relation to GDP. In 2018, according to data from the General Balance of the Union, it reached R $ 3,4 trillion, exceeding half of the GDP (50,5%). 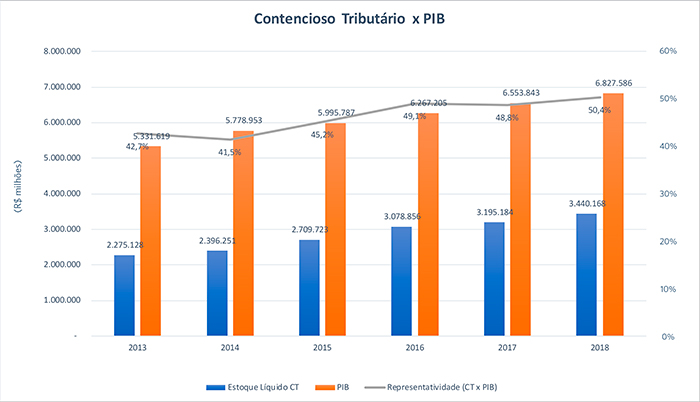 2. Tax lawsuits last almost two decades
The completion of a tax litigation process in Brazil takes an average of 18 years and 11 months, in the sum of the administrative and judicial stages. According to Érica, EY calculated this time based on data from the 2017 Annual Activity Report of the RFB; a report on judgments by the Administrative Council for Tax Appeals (CARF), made available by the agency in 2015 on the occasion of Operation Zelotes; and the Justice in Numbers Report of 2017 and 2018 of the National Council of Justice (CNJ).

3. Several factors induce litigation
In the study, EY cites several factors that contribute to the high degree of litigation in the Brazilian tax system. The list includes: the complexity of the legislation; the amount of ancillary obligations; the high tax burden; and aspects related to penalties, tax debt correction and tax regularization programs that end up making litigation an alternative for business financing.
To illustrate the degree of complexity, the EY partner cited a survey by the Brazilian Institute of Planning and Taxation (IBPT) on the number of changes in tax rules from 1988 to 2018. “In the period, 16 tax constitutional amendments were approved and edited 390.726 tax rules, ”said Érica.

4. Increase in tax assessments and representations for criminal purposes
The study showed a worsening of the situation in recent years. The annual value of credits launched by the Federal Revenue in its inspection procedures increased 68% in 2017, compared to the previous year.

There was also an increase in the percentage of assessments that generated tax representations for criminal purposes, with the application of an aggravated fine (double), which went from 25,42% in 2017 to 29,48% in 2018. 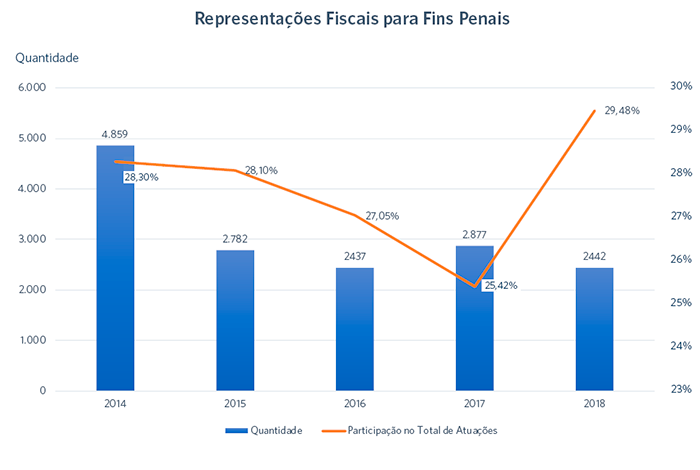 According to the partner of EY, these numbers coincide with the expansion of ancillary obligations and other methods of monitoring large taxpayers and with the entry into force of Law 13.464 / 2017, which instituted productivity bonuses to inspectors linked to a fund. which varies according to the collection.
The study cites a survey carried out by the Brazilian Association of Jurimetry in 2014 on the results of judgments of fines aggravated in the administrative and judicial spheres. The decisions gave taxpayers more reason (fines dropped in 45% of cases) than the tax authorities (maintained at 36%), with partial results in other cases.

5. Greater focus on large contributors
The survey also showed that, in recent years, the IRS has increasingly focused on oversight of large taxpayers, who represented 68,62% of the assessments in 2016 and increased to 82,05% in 2018.
Because of this strategy, litigation is becoming an increasing problem for large companies. EY analyzed the balance sheets of five of the twenty Brazilian companies listed in a survey by Forbes magazine about the 2 largest publicly traded companies in the world in 2019. In some cases, the litigation is greater than the company's market value.
Recalling that in order to discuss tax credits in court, companies are obliged to offer guarantees, usually contracted with banks, EY's partner drew attention to a serious problem that may occur in the near future if the country does not reverse the growth curve of the litigation. "We are already at a very high level of guarantees," warned Érica. "If it continues to grow, we could have a serious crisis in terms of the banks not being able to give these guarantees anymore".

6. Solutions that work in other countries
The analysis of conflict resolution models from six other countries sought to identify mechanisms that could be applied to reduce Brazilian tax litigation. The study chose nations better positioned than Brazil (80th place) in the ranking of the 2017/2018 Global Competitiveness Report of the World Economic Forum: United States (2nd), Germany (5th), Australia (21st), India (40th) , Portugal (42nd) and Mexico (51st). The selection also sought to bring examples of different legal systems (civil law and common law) and of nations with direct influence (Portugal) or economic similarities with Brazil (Mexico and India).

The following is a highlight from each country:

United States: It allows an agreement before or after the issuance of the infraction notice, with quick mediation and arbitration processes independent of conflicts.
Portugal: It provides the taxpayer with an arbitration system immediately after the issuance of the tax assessment notice.
Germany: Favors the dialogue between the tax authorities and the taxpayer during the inspection, enabling informal agreements that prevent the generation of litigation.
Mexico: It allows negotiation between the taxpayer and the tax authorities during the inspection phase, authorizing the conclusion of a conclusive agreement.
India: It has alternative mechanisms for resolving conflicts in complex cases, but judicialization, which was not the target of the tax reform carried out in 2017, remains high. In total, tax proceedings can last up to 31 years.
Australia: It offers ample space for defense and negotiation between the taxpayer and the tax authorities in the administrative appeal phase, including mediation, case assessment, conciliation, conference and neutral assessment.

The final report of the study can be downloaded here.