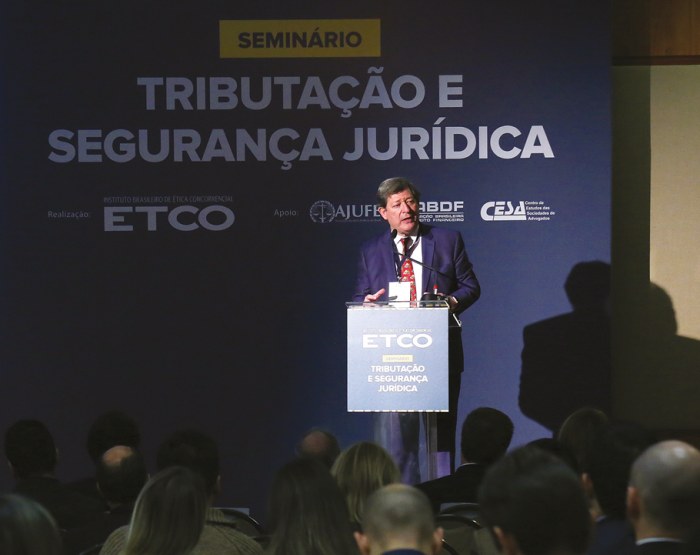 Tax reform discussions often focus on changes in the types of taxes and how to share the burden and distribute resources across society. But they usually leave aside an extremely relevant aspect for the development of the country: the legal security of the tax system.

Brazil is one of the world champions in conflicts between tax authorities and taxpayers. Experts estimate that, in all administrative and judicial instances in which these differences are discussed, the amounts involved already reach R $ 3,3 trillion, which represents about half of the country's GDP. And the trend is for growth.

Heleno Torres, professor at the Faculty of Law of the University of São Paulo (USP), spoke about the points that should guide the improvement of the Brazilian tax system, including the solution of conflicts in tax processes.

Roberto Quiroga, lawyer and professor at USP's law school and Fundação Getúlio Vargas of São Paulo (FGV Direito SP), gave a lecture on the interpretation of the legal standard.

Humberto Ávila, also a professor at USP, dealt with the principles of legal tax security and its relationship with economic development.

Hamilton Dias de Souza, lawyer and counselor at ETCO, presented a critical view of the tax reform proposal under discussion in the National Congress (PEC 45).

Gustavo Brigagão, professor of law and president of the Brazilian Association of Financial Law (ABDF), addressed the international tax challenges in the face of technological innovations of the XNUMXst century.

The seminar was coordinated by the president of the ETCO Advisory Council and former secretary of the Federal Revenue (FHC government), Everardo Maciel, who highlighted the importance of the theme: “It is the most relevant for the country in terms of investment, especially in the tax field . ”

At the opening, the Institute's executive president, Edson Vismona, drew attention to the two extremes of the problem: on the one hand, taxpayers who seek to do everything within the law, but suffer from the complexity of the system, the tax authorities' arbitrariness and constant changes in the norms or in their interpretations - and they often end up paying taxes that they should not while awaiting final decisions of Justice; and on the other hand, regular tax debtors, who do not pay due taxes, use the complexity and delay in decisions to make money illicitly. “The motto of the first is: 'I must not, I deny, but I pay'; the second is ´devo, I don´t deny it and I don´t pay´ ”, summarized Vismona.

In the links below, we present a summary of the main points addressed by each speaker. The full content, including video and transcript of the lectures, is available HERE and will also be converted into a book. The objective, as explained by the chairman of the ETCO Board of Directors, Victório De Marchi, at the end of the seminar, is “that these ideas, these suggestions, these proposals be taken to our legislators to see if we can get a tax system compatible with international needs ”.

The event was supported by ABDF, Ajufe (Association of Federal Judges of Brazil) and CESA (Center for the Study of Law Firms).