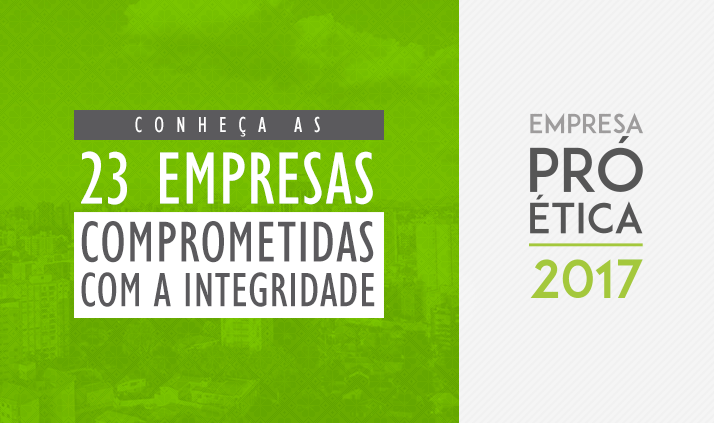 The Ministry of Transparency and the Comptroller General of the Union (CGU) discloses, this Wednesday (6), the 23 companies approved in the 2017 edition of the Pro-Ethics. The companies were recognized, by relevant government and civil society bodies, as integral and ethical in their relations between the public and private sectors. The announcement was made during the 4th Clean Company Law Conference, in Brasília (DF).

>>> Check out the presentation by the CGU Minister

Of these, 15 are large companies; seven mediums and a small one. With regard to the sector in which it operates, the distribution is found in: transformation industries (8), electricity and gas (5), scientific activities (3), human health and social services (2), financial activities (2), activities administrative (1), information and communication (1) and construction (1).

Pró-Ética, a pioneering initiative in Latin America, was created by CGU in 2010 in partnership with the Ethos Institute. The objective is to encourage companies to adopt the policies and actions necessary to create a healthy environment, which reduces the risks of fraud and corruption.

Registrations for Pro-Ética 2017 took place between February and May this year. The number of enrollment requests was a record for the second consecutive year, with an increase of 92% over the previous edition. Of these, 198 sent the completed questionnaire. After preliminary analysis by the management committee, 171 fulfilled the admissibility requirements and had their respective compliance programs evaluated - a number 131% higher than 2016.

The Pro-Ética evaluation questionnaire is separated by area: commitment from top management and commitment to ethics; policies and procedures; communication and training; reporting and remediation channels; risk analysis and monitoring; and transparency and accountability in political and social financing. The company that reaches a score equal to or greater than 70 points (out of a maximum of 100) and, cumulatively, reaches a minimum of 40% in all areas of the questionnaire will be able to compose the Pro-Ethics list.

After completing the questionnaire, it is necessary to wait for the evaluation of the management committee of Pró-Ética, composed of the National Confederation of Industries (CNI), Brazilian Federation of Banks (Febraban), BM&F Bovespa, Ministry of Development Industry and Commerce (MDIC) , Brazilian Export and Investment Promotion Agency (Apex), Institute of Independent Auditors of Brazil (Ibracon), Brazilian Service of Support to Micro and Small Enterprises (Sebrae) and, recently, Brazilian Institute of Competitive Ethics (ETCO).

The company included in Pró-Ética is not granted different treatment in its relations with the Public Administration. It is a commitment to business ethics, voluntarily assumed by corporations, which indicates that the company strives to put in place internal measures that reduce the probability of the occurrence of illicit acts and deviations and, when they occur, guarantee the detection and interruption of these acts, in a quick way, and the remedy of their adverse effects.

Among the benefits for companies participating in the initiative are: public recognition of their commitment to preventing and fighting corruption; positive advertising for an approved company on the list; evaluation of the Integrity Program by a specialized team; report with detailed analysis of its integrity measures and suggestions for improvement.

The application of the legislation by CGU, in the investigation and punishment of companies - including within the scope of Operation Lava Jato - has generated reflexes in the Brazilian business environment. The possibility of suffering financial losses (fines on billing and unfairness), in addition to possible damage to the image, when proven the practice of illicit acts against the Public Administration, caused a significant increase in the demand of companies for guidance on how to implement measures of integrity and transparency in the corporate environment.

Another factor that may have caused in 2017 the significant increase in the number of companies interested in Pró-Ética was the reinforcement in the dissemination of the initiative. During the months of March and April, the then Minister of Transparency, Torquato Jardim, gave lectures with about a thousand businessmen, in ten capitals of the country, to present the benefits of the program and to stimulate the participation of new institutions and sectors of the economy.

The pressure for direct voting of PL 2337/2021 in the plenary without a broad debate of the committees in the Chamber was pointed out by representatives of 69 productive sectors as the great obstacle to the construction of a negotiated text of Income Tax Reform and taxation of profits and dividends.