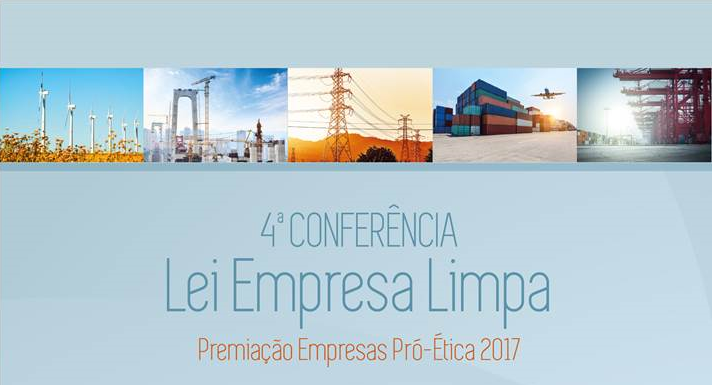 On December 6, in Brasília (DF), the Ministry of Transparency and the Comptroller General of the Union (CGU), in partnership with the National Confederation of Industry (CNI), 4th Clean Company Law Conference. The objective is to promote dialogue and exchange of experiences between the public and private sectors on issues related to the application of Law 12.846 / 2013 (also known as the Anti-Corruption Law). The event is open to businessmen, civil servants, academics and other interested citizens. Registration is free and places are limited.

In this edition, the focus of the debates is the fight against transnational bribery and the expansion of transparency in the public-private relationship. The panels address the implementation of integrity programs, which comply with national and foreign legislation; accountability processes in multiple jurisdictions; donation of gifts and presents; regulation for the defense of interests activities; among other topics.

During the event, companies approved in the Pro-Ethics 2017, an initiative by CGU that seeks to promote a more honest, ethical and transparent corporate environment in the Brazilian business sector. This year, 375 organizations have shown interest in participating - an increase of 92% over the previous edition. After preliminary analysis, 171 met the admissibility requirements and had the respective compliance evaluated.

Pró-Ética, launched in 2010, aims to encourage companies to adopt policies and actions that reduce the risks of fraud and corruption; and to increase confidence in relations between the public and private sectors. It is a commitment to ethics, voluntarily assumed by corporations.

The award will be attended by representatives of the Steering Committee, currently composed of CGU and the following institutions: Brazilian Trade and Investment Promotion Agency (Apex Brasil); B3 SA - Brasil, Bolsa, Balcão; the Confederation of Agriculture and Livestock of Brazil (CNA); the National Confederation of Trade in Goods, Services and Tourism (CNC); the CNI; the Brazilian Federation of Banks (Febraban); the Ministry of Industry, Foreign Trade and Services (MDIC); the Brazilian Institute of Competitive Ethics (ETCO); the Institute of Independent Auditors of Brazil (Ibracon); the Ethos Institute for Business and Social Responsibility; and the Brazilian Micro and Small Business Support Service (Sebrae).