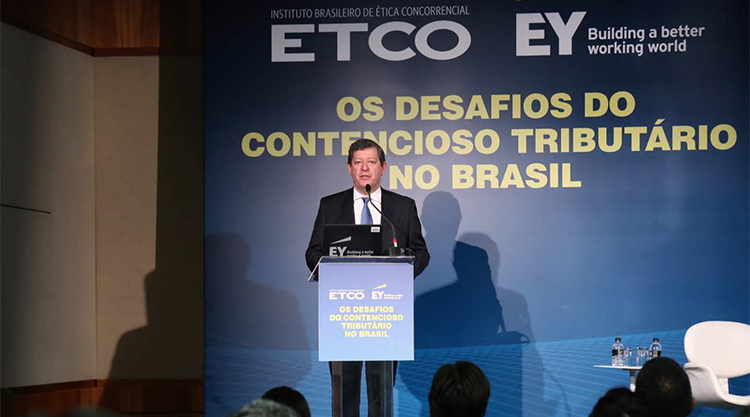 Edson Vismona, executive president of ETCO, at the presentation of the study

The Brazilian Institute of Ethical Competition, ETCO and EY, presented, on 28/11, in São Paulo, the study “The Challenges of Tax Litigation in Brazil”, a mapping of the main challenges of this practice in Brazil and potential mitigating measures. The survey considers some relevant aspects of litigation compared to other countries: Germany, Australia, United States, India, Mexico and Portugal.

See the main conclusions of the study

During the event to present the study, the book “Legal Security and Taxation” was also launched, by journalists and writers, Oscar Pilagallo and Fernando Mello. The material was based on the analysis of renowned tax experts, Gustavo Brigagão, Hamilton Dias de Souza, Heleno Torres, Humberto Ávila and Roberto Quiroga Mosquera. On the occasion, EY's technical tax team detailed the main results of the study, which were discussed by tax experts Roberto Quiroga and Breno Vasconcelos, together with Edson Vismona, president of ETCO and Érica Perin, partner of EY for the tax area.

“For Brazil to attract investments, grow and provide public services to the population, it is necessary for the State to collect the taxes due to it and for companies to be secure in relation to current tax rules. Today, the country faces difficulties in both directions, which compromises business development ”, says Edson Vismona, president of ETCO.

Also according to the executive, the relationship between the Brazilian tax authorities and the taxpayer needs to change. “The government cannot regard taxpayers in good and bad faith in the same way. Today, mechanisms are already in place to identify so-called debtors, and there must be a differentiation in the treatment of cases, adds Vismona.

For EY partner Érica Perin, understanding Brazil's tax litigation is important for both taxpayers and the government. "The high stock of tax credits, the delay in resolving disputes and the inspection strategies for the efficiency of assessments have an impact on the budget of federal entities, on business activity and, in general, on the lives of taxpayers," he said.

The study “The Challenges of Tax Litigation in Brazil” revealed important points related to legal tax security, such as:

The Union's contentious tax credit stock, composed of tax credit from the Federal Revenue of Brazil (RFB) and the Attorney General's Office of the National Treasury (PGFN), reached R $ 3,4 trillion in 2018, according to data from the General Balance Sheet of the Union. This value is higher than the revenues made by the Union and reached 50,5% of GDP in 2018. If collected, it would make the net worth of the Union positive (since 2015, it has been negative).

The completion of a tax litigation process in Brazil takes an average of 18 years and 11 months, when the administrative and judicial stages are added. The time was calculated based on data from the (i) 2017 Annual Activity Report of the RFB; (ii) report on judgments of the Administrative Council for Tax Appeals (CARF), made available by the agency in 2015 at the time of Operation Zelotes; and (iii) the 2017 and 2018 Justice in Numbers Report of the National Council of Justice (CNJ).

Among the factors that contribute to the high degree of litigation in the Brazilian tax system, the following stand out: complexity of the legislation; the amount of ancillary obligations; the extension of the country's territory and borders; the high tax burden; and aspects related to penalties, tax debt correction and tax regularization programs that end up making litigation an alternative for business financing.

In recent years, the IRS has increased its focus on inspection

large taxpayers, who represented 68,62% of the assessments in 2016 and increased to 82,05% in 2018. On the one hand, this strategy has an impact on tax collection. In 2018, the investigation of 1.882 collection distortions related to the largest contributors generated revenue of R $ 27,52 billion to Revenue - a record amount for this specific group.

On the other hand, it contributes to the increase in litigation and its weight in the companies' balance sheet. The financial statements of publicly traded corporations show a high representation of tax litigation in this group of companies. In some cases, it even exceeds the company's market value.

Good practices that work in other countries

they can guide a reform to provide more legal certainty and reduce the generation of litigation in our tax system. The study analyzed six countries better positioned than Brazil (80th place) in the World Economic Forum's 2017/2018 Global Competitiveness Report ranking: United States (2nd), Germany (5th), Australia (21st), India (40th) ), Portugal (42nd) and Mexico (51st), chosen for presenting different models of conflict solutions or for their direct influence (Portugal) or economic similarities with Brazil (Mexico). India was included for also demonstrating a high level of litigation between tax authorities and taxpayers and for not tackling this problem in the deep tax reform carried out in 2017.