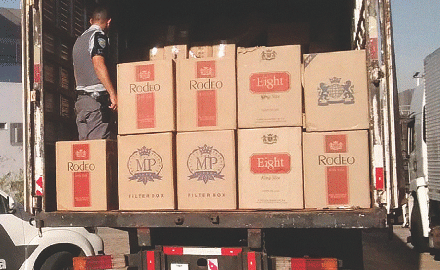 Brazil has become the largest global market for illegal cigarettes. In 2017, 48% of the brands sold in the country were illegal, with the vast majority smuggled from Paraguay. To get an idea of ​​the size of the problem, today the most sold cigarette brand in Brazil is Eight, manufactured by Tabacalera del Este, a company owned by Paraguayan President Horacio Cartes.

This trade brings huge losses to Brazil. The cigarette sector has one of the highest tax burdens in the country, which, since 2011, means that around R $ 23 billion of taxes in taxes were no longer collected, an amount that could have been reverted to the benefit of the Brazilian population.

But cigarette smuggling does not only bring financial losses to the country. This trade is now controlled by criminal factions such as the First Command of the Capital and the Red Command, and the profits from the activity also serve to encourage the trafficking of drugs, arms and ammunition in the country. Fighting to reduce smuggling is essential to combat the increase in urban violence across Brazil.

In addition to crime and tax evasion, smuggling also contributes to the increase in unemployment, has a negative impact on the competitiveness of companies and harms the health of consumers.

According to a study by the State University of Ponta Grossa, Paraguayan cigarettes have high concentrations of heavy metals, with values ​​up to 11 times higher than those found in cigarettes legally manufactured in Brazil. In addition, the study also found traces of rat hair, cockroach paws and mite colonies in Paraguayan cigarettes seized by authorities.

Several factors contributed to the explosion in cigarette smuggling. Initially, it is necessary to point out the porosity of borders. Brazil has about 3 agents to inspect not only the nearly 17 kilometers of borders, but also ports and airports across the country. Thus, it is practically impossible to prevent the entry of these products in Brazil.

But perhaps the main factor in stimulating cigarette smuggling is the high tax burden. Taxes in the sector represent up to 80% of the value of a pack of cigarettes, while in Paraguay, taxes paid by cigarette manufacturers are only 16%. This tax disparity is a huge stimulus for this illegal trade, and they guarantee profit margins of more than 150% in some cases.

This also undermines the National Tobacco Control Policy, as about half of the cigarette market does not meet the measures stipulated by law such as the minimum price policy and the adoption of warning messages and images about the risks in consumption.

For the president of the  (ETCO) and the National Forum Against Piracy and Illegality (FNCP), Edson Vismona, a country that wants to be big cannot live with this stain anymore. "It is no longer possible to accept that the best-selling cigarette in Brazil is smuggled from Paraguay," he says. “It is necessary to promote the union of forces between the government and organized civil society to find solutions to this problem” believes Vismona.