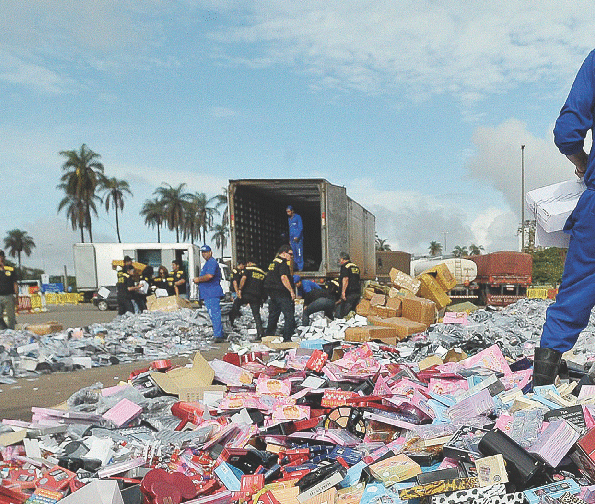 Tougher laws, stricter policing at borders and permanent inspection at points of sale are indispensable weapons to combat smuggling. A survey released in November calls attention, however, to another factor that is at the heart of the problem: the difference in its tax burden in Brazil and in neighboring countries, especially Paraguay.

The study “The Economic Logic of Smuggling” was carried out by the Institute of Economic and Social Development of Borders (IDESF), an association that studies the problems of cities located in border regions. He makes a comparison between the computer sector and that of cigarettes, which in recent years have had opposite trajectories in relation to the tax burden and smuggling.

Until the early 2000s, the computer segment was one of those that suffered most from the illegal trade. In 2005, Law 11.196 / 2005, known as the Lei do Bem, was passed, which zeroed PIS and Cofins rates in the sector. Since then, the graphs show the growth of national production and the fall in the number of seizures of smuggled computer items and leave no doubt about the cause and effect relationship between the two factors.

In 2006, seizures of computer products made by the Federal Police - which always represent a minuscule portion of smuggling - were estimated at US $ 12 million. In the years that followed, that number dropped steadily, ending 2016 below $ 2 million. In the same period, the production of Brazilian industry jumped from less than 4 million to more than 12 million computers per year, with sales jumping from R $ 4 billion to R $ 10,7 billion. The cigarette sector is experiencing a reverse movement. Since 2012, taxes on the product have been rising year on year due to a tax policy supposedly designed to discourage consumption via price increases to consumers. According to the IDESF survey, however, the main consequences were the fall in national production and the increase in smuggling - with all the losses that this type of crime causes, including loss of revenue and encouragement to organized crime.

ALMOST HALF OF THE MARKET

From 2012 to 2016, the price of Brazilian cigarettes rose 148%, while Brazilian production fell 40,29%. In contrast, contraband exploded. In 2012, seizures of cigarettes brought illegally from Paraguay corresponded to 3,78% of national production. Three years later, this index had already reached 17,7%, as found by IDESF.

The figures presented in the study coincide with what has been observed in Ibope research on the consumption habits of Brazilians, including that of cigarettes. The survey has revealed an increasing presence of contraband brands, which represented 34% in 2013 and reached almost half of the country's consumption this year (48%). In the same period, the sector's tax burden rose from 65% to 71%.

The IDESF study was based on information from several sources, including tax analysis, price surveys in Brazil and Paraguay, police inquiries and interviews with people involved in the illegal trade. The data show that the smugglers' profit is directly linked to the difference between the levels of taxes practiced in the two countries, which today is higher than 50% in the case of cigarettes and 14% in computer items. Because of this advantage of the illicit product, criminals pay R $ 0,70 per pack of cigarettes in Paraguay and resell it in Brazil for R $ 2,40, at wholesale prices. Transportation costs, grooming of drivers, security guards and other contraband operators and expenses with corruption of inspectors and police consume 22,4% of this amount. The result is a return of 179% to 231% on the invested capital. In the same comparison, computers provide a maximum margin of 13,34%, which can even be negative. The product has become unviable for criminals.

IDESF President Luciano Barros believes that Brazil will not be able to win the war on smuggling unless it takes into account the tax issue. "The government has to understand that there is an economic logic to this type of crime," he says. “It is necessary to look beyond passenger economic benefits and measure the impacts of these decisions on the lives of Brazilians. It is no longer possible to play blindly in favor of smuggling in the name of goals that do not take into account social aspects, especially of the border populations, who are those who suffer these consequences in the most direct and cruel way. ”