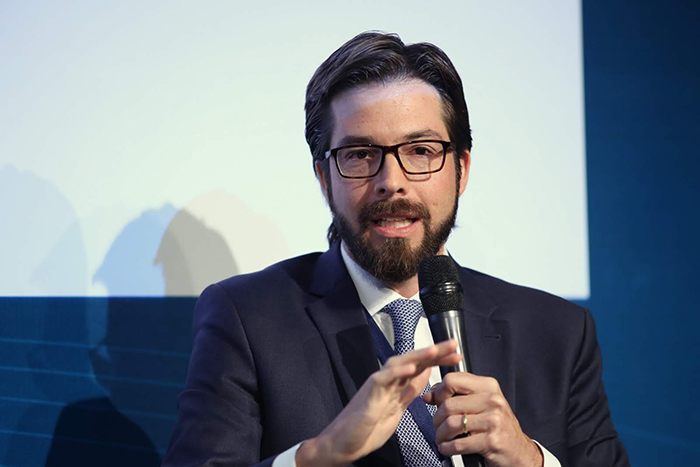 The contributions of tax law professor Breno Vasconcelos, from FGV Direito SP, in the debate after the presentation of the Brazilian Tax Litigation Challenges study shed even more light on the topic. He is one of the authors of another important research on the subject, which collected federal, state and municipal data and compared Brazilian litigation with that of OECD countries and Latin America.

"The presentation of a study like this is a public good", he praised. "We are talking about a service that ETCO, EY and ETCO associates are providing to society". Breno said that his research “hits almost pennies with what EY achieved in relation to federal litigation”, of an amount equivalent to just over half of the Brazilian GDP. "But the situation is even worse," he said. According to him, adding also the litigation of the states and few municipalities whose data are available, today it reaches a figure corresponding to 73% of GDP.

The Brazilian situation, according to Breno, is completely different from what is observed elsewhere. “We usually hear a lot from representatives of the tax administration that the Brazilian taxpayer is bad. But when I ask companies that work here and abroad about litigation in other countries, the difference is clear ”, said Breno. “They say: ´in Spain, I have a case, while in Brazil there are 3 tax cases´ The data is really impacting.”

The study in which he participated made a comparison of the federal tax litigation under discussion in the administrative sphere in Brazil with that of 14 other countries analyzed by the OECD in research with data from 2013. Here, this portion of the litigation represented 13,9% of GDP in that year (and it would get even worse afterwards, reaching 16,4% in 2018). In nine OECD nations analyzed, the median for the same data was 0,28%. In five countries in Latin America, 0,19%.

How to solve the problem? According to Breno, the solution depends on several initiatives. A fundamental step, in his opinion, is “the tax administration to know how to differentiate who is the good taxpayer and who is the bad taxpayer”. And based on this distinction, create conflict resolution measures aimed specifically at good taxpayers, such as advanced tax ruling, fast tracks and a service channel that is easily accessible in person or by phone. It is also necessary to reduce the complexity and excess of changes in the tax system, which has gained 390 thousand new rules in the last three decades.

The tax attorney also made a suggestion that, he warned, carries a certain amount of provocation. Demonstrating that the two instances of judgment in the administrative process have taken very different decisions - the first, represented by the Federal Revenue Judgment Offices (DRJs), largely favoring the tax authorities, and the second, the Administrative Council for Tax Appeals (CARF), giving taxpayers more reason -, asked if it would not be better to end the trials in the DRJs and employ their technical staff in actions to prevent litigation. For example, designing consultation solutions, negotiating agreements or mediating conflicts between tax officials and taxpayers.

“From DRJ to CARF, approximately 6% of official resources go up. It is a fact that [shows that] the DRJ is canceling only 6% of the infraction notices submitted to it in an amount greater than R $ 2,5 million, therefore an appeal to CARF. That is, the legality control of the DRJ is 6% of the total inventory. What is CARF's control? Official data: 52,4% of CARF cases are judged in favor of taxpayers. Looking at this data, we begin to realize that something is wrong. Is the DRJ fulfilling its legality control role? We understood that it was not. ”

“Our provocation is as follows. I am not talking about people, but about the entity: what is the relevance of a DRJ today for purposes of controlling the legality of tax credit? It is small: 6%. So, what to do with DRJ? They are groups of auditors, a collegiate with highly prepared people who are not doing something correctly. And there are two data: the DRJ judges according to an infralegal normative reference, it is obliged to follow the understanding of the Federal Revenue Secretary. The DRJ's normative judgment system is more restricted than the CARF normative system, which is the legal system, are treated etc. ”

“[So], bring the DRJ to the pre-litigation. It brings this mass of excellent professionals to answer consultation solutions. Bring the DRJs to serve as the collegiate that will do the pre-auto analysis. Some countries, when we are going to study comparative law - Denmark, Norway, the United Kingdom -, have a pre-report, it is a draft of the tax report in which the supervisor submits it to a collegiate body and there you can make a kind of agreement, mediation, transaction, before this collegiate ”.