Culture of Transgressions in Brazil - Lessons from History 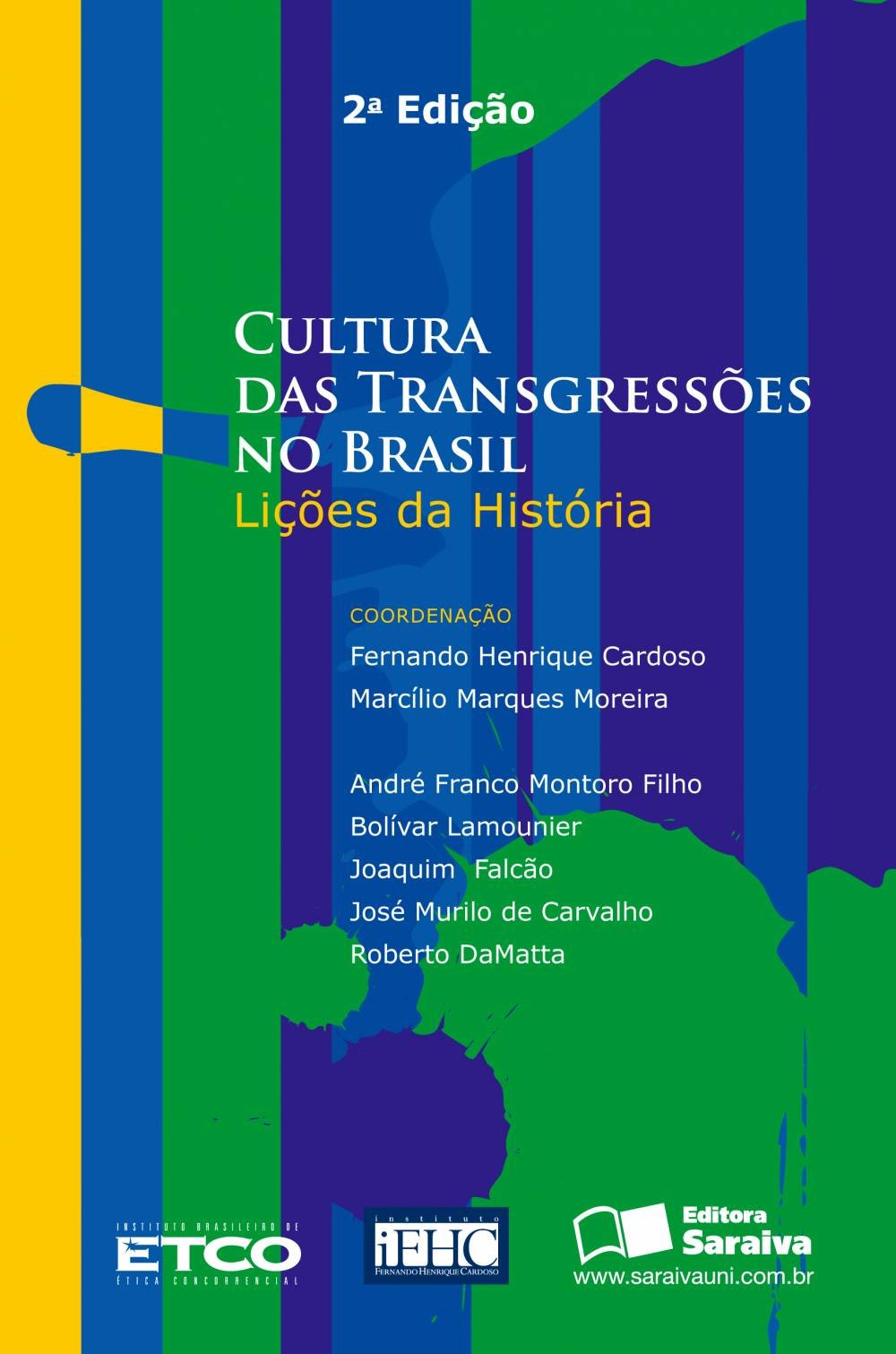 Second edition of the book edited by ETCO in partnership with iFHC investigates the origin of practices that escape the sense of responsibility. The work was prepared based on a seminar, held in August 2007 at iFHC, where the central issue was the culture of transgressions in Brazil.

Few reflections have deserved the theme of transgressions in Brazil, despite the fact that the practice of behavior contrary to laws, norms and codes of conduct is so ingrained in the way of being of the Brazilian people, in the individual and in the social, as to be an element of building national memory.

The urgency - always present - of the need to bring to light the debate on such a complex and diffuse subject makes reading the book Culture of Transgressions in Brazil - Lessons of History, recently launched by ETCO - Brazilian Institute of Ethics Concurrential, essential. in partnership with Instituto Fernando Henrique Cardoso, iFHC. Under the coordination of ex-minister Marcílio Marques Moreira and ex-president Fernando Henrique himself, and with a presentation by the economist and ETCO president, André Franco Montoro Filho, the book brings a good overview of the various facets that shape transgressions, with the concern to try to trace throughout the history of the country the origin and evolution of practices that escape the sense of responsibilities and obligations in the most diverse segments, both in the public and private spheres.

Because they are multifaceted, transgressions allow different interpretations and approaches, and it is precisely in the “richness” of the ways of feeling and facing the theme, so vital to the widening of the discussion, the great contribution of the ETCO initiative together with the iFHC. The result of a seminar dedicated to the theme, the book brings together texts by four experts, experts in the country's social, political and cultural issues, from the perspective of History, Law, Anthropology and Political Science.

Joaquim Falcão, director of the FGV-Rio School of Law, introduces in his text the notion of “collectivized transgressions”, in which the repeated and customary practice of individual transgressions ends up exceeding the limit of the unit to gain the form of the collective, understood by him as a result of the repetition of the same act by millions of people or entities. It uses property law to discuss in a practical way about three situations characteristic of the growing illegalization of everyday life: the right to housing, the related issue of definitive deed and copyright. Falcão believes that they are examples of the monopoly legal structure established in the country. He defends the diversification of legislation in the form of a pluralization of legal acts in accordance with the most complex and differentiated aspects that guide social relations today.

Historian José Murilo de Carvalho, on the other hand, delves into the concept of legal monopoly and highlights in his text the role that laws and coroners have always played in the country's political evolution. For him, the set of laws, which benefits the operators of the police and legal system, has the effect of elitizing justice and inciting transgression. It is as if what José Murilo calls “legiferous fury” worked as a kind of feedback factor for transgression, creating a vicious circle that would only benefit the law enforcers themselves or those who can pay the costs of a lawsuit.

To break with this state of affairs, José Murilo believes that some attitudes, in the way of thinking and acting, would need to disappear from society, such as the moralistic stance characteristic of “udenism”, fatalism and pragmatic cynicism, in addition to the current view of that the law is somewhat disposable, instead of being understood as an end, necessary for the survival of the system of representative democracy.

In the economy, the country sustains a sophisticated and advanced system, but it is still subordinated to a heavy and backward institutional framework

Anthropologist Roberto DaMatta's text highlights the “representative” aspect of the perpetrator's surroundings as, for him, the variable “who was” would encompass the nature of the crime committed in a complication of the complex of egalitarian and hierarchical values. "Our problem would not be the law, but the care in its application, which forces us to consider who committed the crime," he says. Here too, the importance of a deeper change in social values ​​that leads to the politicization of the issue is raised, because, DaMatta believes, without being aware of the difference between “transgression” and “transgressions” conceived and lived in specific societies, endowed with a regime of guilt, shame, respect and honor that is equally particular, the trend is to continue introducing legal mechanisms that, "even if they are able to surround the entire block, let the thief escape".

Political scientist Bolívar Lamounier tries to establish a relationship between transgression and the market economy. His intriguing article questions the possibility of the middle class playing the role of an agent for revising values ​​and providing political support to boost the market economy and to stop the escalation of transgression. Would, he asks, be the Brazilian middle class a solution or a problem in the context of the issue of transgressions? The answer is not trivial. Bolívar is, however, convinced that the persistent increase in transgression in Brazil is an inevitable correlate of the modernization process, the price paid for a dynamic, modern and democratic society. The other side of the issue, he points out, is the accumulated delay in the institutional field, in the construction of values ​​and standards of sociability comparable to those of more developed countries. Reading the book Culture of Transgressions in Brazil confirms the perception that we live in a deeply dichotomous reality: the country operates in a sophisticated and advanced system in the economic sector, but is still subordinated to a heavy and backward institutional system. Between one and the other, a society proliferates that benefits from the progress of the economy while trying to survive jumps, jumping from branch to branch.

* Maria Clara RM do Prado is a journalist and director of Cin - Comunicação Inteligente, a columnist for the newspaper Valor Econômico and author of the book A Real História do Real, published by Record.

God and the castaways in the country of transgression

Will Brazil ever be able to overcome corruption, tax evasion, piracy, and other such tricks? Anthropologist Roberto DaMatta addressed this issue very well

The publication summarizes the ETCO 10 + 10 Debate Cycle, held in 2013 to commemorate the Institute's 10th anniversary

Corruption as an obstacle to development

Work was built from the compilation of lectures presented at the seminar "The Impact of Corruption on Development", conducted by ETCO

André Franco Montoro Filho covers subjects such as competitive ethics, the role of law, deviations from corruption and dissatisfaction with purely legislative solutions.

Authors talk about “Culture of Transgressions” on radio program

Three of the five authors of the book "Culture of Transgressions in Brazil - Scenarios of Tomorrow" (Renato Janine Ribeiro, Aristides Junqueira and Marcílio Marques Moreira), in addition to the president of ETCO,

Is capitalism ethical? This is a very difficult question to answer. Basically, there are two main lines today. One emphasizes the dynamics of a system, or a style, that liberates production

Culture of Transgressions - Scenarios of Tomorrow