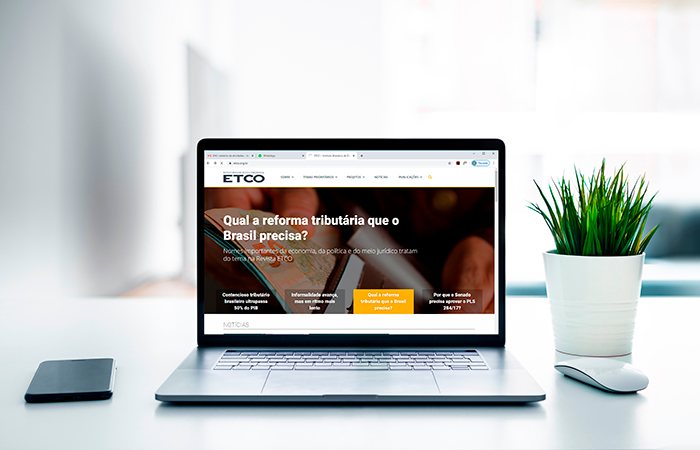 Among the projects developed by the Communication area, the main highlights of 2019 were the following:

Record audience and new sections on the site

The ETCO internet portal gained new sections, broke audience records and started a project to redesign the layout and information architecture in 2019.

The content with the most views was the page about the research that ETCO commissioned Datafolha in 2017 to identify young people's perception of ethics in Brazilian society. There were 24.809 hits in the year. Another highly accessed content was the special on recurring tax debtors available on the website, with 16.365 page views.

The new sections were created to gather coverage of events held by the Institute, including videos and transcripts of the lectures. The content of ETCO Magazine, which could already be accessed in PDF format, also became available on the website pages, making it easier to consult.

In 2019, ETCO hired FSB Comunicação to take care of its relationship with the press. FSB is the main company in this sector in the country and in Latin America and the 33rd largest in the world, according to the Global Top 250 PR Agency Ranking 2019.

The Institute had a great presence in the media throughout the year, with a total of 1.497 citations in dozens of vehicles, especially Globo and Globonews, the newspapers O Estado de S. Paulo, Folha de S.Paulo, O Globo, Valor Econômico, Correio Braziliense and Jornal de Brasília, Veja, Exame and Istoé Dinheiro magazines and portals G1 and R7.

Journalistic coverage of the Institute's events and other actions was published in the 25th edition of ETCO Magazine, launched in October. The main theme, highlighted on the cover, was the contributions of authorities from politics, economics, the legal environment and academia who participated in the two seminars on tax reform and legal security held by the Institute (one of them, in partnership with the newspaper Valor Econômico ).

ETCO Magazine is sent to leaders of the Executive, Legislative and Judiciary branches and to other important actors in the public debate throughout Brazil.