In articles, Edson Vismona disseminates the Institute's positions on tax reform, the ethics between ESG commitments and a change that could worsen fuel distribution in the country 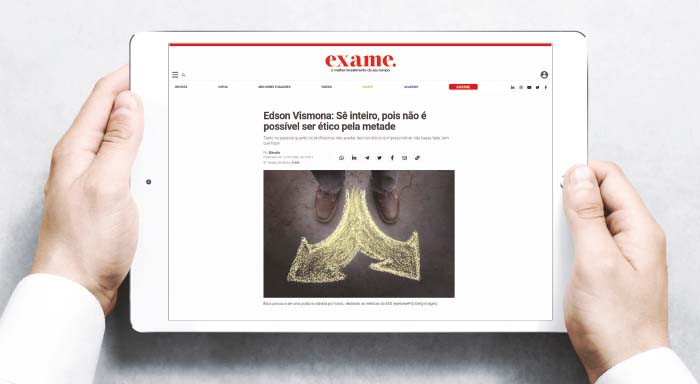 Disseminate ETCO's vision on projects related to competition ethics and the strengthening of the business environment for opinion makers. This is the objective of the articles that the executive president of ETCO, Edson Vismona, has periodically published in his column on the website of Exame magazine, one of the most influential business publications in the country.

In recent texts, Vismona has addressed the importance of ethics for development; reiterated the Institute's position on the reform of taxes on consumption; criticized the bill to change the Income Tax under discussion in Congress, which provoked “unanimous and cohesive revulsion” from the productive sector; and deplored the government's “amazing initiative” to alter the fuel distribution structure in a way that favors fraudsters and persistent tax debtors.

Here are some excerpts from the articles:

In view of the different positions, we at ETCO, in principle, defend and encourage actions to encourage ethics in the business environment and, in this context, the tax issue is essential. Any economic activity is affected if a company deliberately commits tax offenses for profit. Tax evasion perverts fair competition, encourages illegality and harms society as a whole.

As a contribution to the necessary debate, I present some pillars that, in ETCO's view, any tax proposal must ensure: (i) legal security; (ii) simplification of taxpayer and real-time inspection procedures; (iii) rationalization of processes; (iv) no increase in the tax burden; (v) definition of uniform rates, fighting the fiscal war; and (vi) exemption from exports (with the maintenance of existing immunity and credits). (...)

The Tax Reform represents an opportunity to elevate Brazil to a level of greater development, and this moment cannot be wasted.

The guarantee of the necessary legal security - simplifying the tax structure and promoting the formalization of the economy - alongside changes in the tax process - with the reduction of litigation and the fight against the practices of persistent debtors - constitute parameters and premises that should guide the conformation of a new reality in the tax/taxpayer relationship.

Fernando Pessoa's poetry teaches: “To be great, be whole… Be whole in each thing…”, this lesson of the great poet inspires us to understand that the ethical posture must be like that, it is not possible to be ethical in half, to be in the personal and not professional life, and vice versa.

The same occurs in the business environment, companies have to base their conduct on values ​​and principles and not accept ethical deviations. It has to be full.

Thus, it is not acceptable to disrespect labor rights and allow harassing practices, claiming that you respect the rights of consumers or that you comply with integrity processes, but sell fake products or, to ensure a sale, corrupt public officials.

It is common for companies, when defining their mission, to affirm that they have a duty to respect the laws, consumers, employees and that they defend the preservation of the environment and sustainability. However, as defined by Aristotle: “Virtue is in transforming values ​​into action”. Thus, we are virtuous if we practice the commitments made. It's not enough to talk, you have to do it.

Ethics based on ESG commitments

In Brazil, in the wake of the wide repercussions of the corruption scandals that have swept the country, integrity policies have assumed great importance, with codes of ethics and a channel for complaints, including as a condition for participating in business.

This need became a posture demanded by more conscientious investors, consumers and employees, validating the ESG metrics, so in vogue, defining the obligations with the environment, with the social (community care; diversity, inclusion, psychological safety) and governance (combating any ethical and legal deviations).

Companies were urged to assume commitments of respect for coexistence and ethics, not accepting deviations, in all their departments and areas of activity, demanding the same from suppliers and customers. The public sphere has also been aligning itself with this policy, with the installation of controllerships, internal affairs and ombudsmen, encouraging a culture of integrity.

Accompanying this movement, the associations representing the productive sectors must also adopt parameters of sectorial conduct. Fighting corruption and defending the legality and ESG parameters cannot be isolated attitudes, but rather a single and broad one. For a good coexistence in the business environment, the uniform posture of compliance with the law and ethics in the productive segments preserves legal security.

There is always talk of the urgent need to have a “tax reform” that improves our system, is comprehensive and simplifies the fulfillment of obligations and, of course, does not raise taxes even more.

These complex objectives will only be achieved with a broad debate, with the participation of experts in the intricacies of tax law, businessmen, taxpayer representatives, governments, civil society and politicians, and that there is a meeting of accounts, all to assess the consequences, risks and the scope of the measures that will be adopted.

But here comes a package that, far from the necessary caution, promotes severe changes in the tax structure: it alters income taxation; dividends; of retained earnings; non-deductibility of interest on equity; it generates new bureaucratic procedures and will increase the tax burden, burden productive investments and, of course, in the end, consumers.

With a strong reaction from industry, commerce, services, liberal professionals, states and municipalities, opinions were presented by the rapporteur, further confusing what is incomprehensible. It's the "puxadinho" logic. Result: unanimous and cohesive repulsion, contrary to the saying that claims to be “dumb unanimity”.

But everything can get worse. The Federal Chamber decides that this matter must be voted on as a matter of urgency! Impairing a deeper discussion, with studies and technical debates.

Taxpayers and productive sectors were run over. The political logic moves away from society, with populist justifications.

I point out another nonsense. The Executive Branch proposes a Provisional Measure to profoundly change the structure of fuel distribution. On the one hand, allowing the direct sale of ethanol by the mills to service stations and, on the other, authorizing the sale of fuel from a different source than that indicated by the banner of the service station. Hasty and inexplicable proposal.

The simple justification is illusory, the price will fall and the consumer will benefit, as if it were possible to reduce the final price without changing the tax structure that focuses on fuels. These misconceptions will encourage non-payment of taxes, a practice that plagues the entire industry.

It will be very difficult, if not impossible, to oversee the distribution chain and, in the case of the sale of a product other than that of a service station, the consumer will be deceived, as they will have the belief that they are supplying a product from a brand they trust and he will receive something whose origin he does not know.

This amazing initiative, which is applauded by persistent debtors, has never been defended by the industry nor by consumers. A real mistake.

Some questions: How urgent is it for such a disruptive action to be presented via MP? What are the real interests that motivate it? Have the risks been assessed?