With the word, our advisers

ETCO's Advisory Board is made up of great names that exercise or have exercised relevant functions in the Public Power or in the private sector. Check out what some of them think about the importance of ethics and the role of ETCO in Brazil 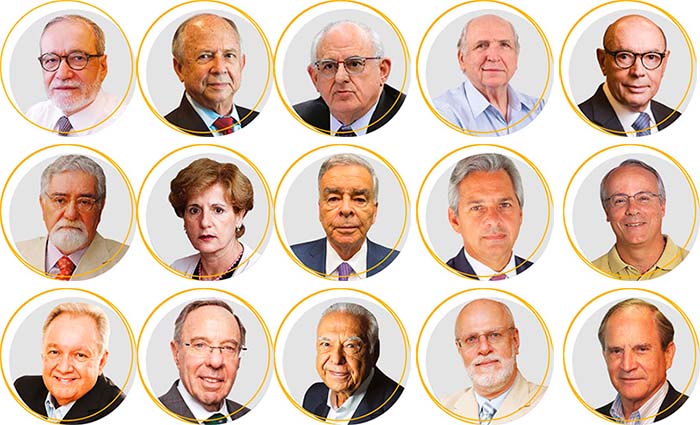 ETCO's Advisory Board brings together names with a vast curriculum of services provided to the country, in the productive sector, in academia or in the three branches of government. Some of them share in this issue their vision of the importance of ethics and the role of the Institute in society. To access the texts, click on the advisor's name.

Everardo Maciel, tax consultant, was secretary of the Federal Revenue between 1995 and 2002 (FHC governments), is president of the ETCO Advisory Board

Marcílio Marques Moreira, economist and diplomat, was ambassador of Brazil to the United States government (1986 to 1991), minister of Economy, Finance and Planning (1991 to 1992) and president of the Public Ethics Commission of the Presidency of the Republic (2005 to 2008). He was chairman of the ETCO Advisory Board (2006 to 2015).

Hoche José Pulcherio, managing partner of the CarrierWeb group companies in Brazil. He made a career at Coca-Cola Co., occupying various positions in Brazil and abroad between 1982 and 2015. He was president of the Association of Soft Drinks and Non-Alcoholic Beverages Industry (2002-2015).

Theo Van Der Loo, director of several companies and organizations, he made a career as an executive in the pharmaceutical industry. He was CEO of Bayer in Brazil between 2011 and 2018. With the experience of having lived in several countries, he works as a consultant engaged in diversity issues.

Maria Tereza Sadek, a professor at the Department of Political Science at USP, with three postdoctoral degrees, carried out in Brazil, the United States and England, develops research on the Brazilian judicial system. Author of several books, she was director of the Department of Judicial Research of the National Council of Justice (CNJ).

Aristides Junqueira Alvarenga, graduated in Law from UFMG, he served as Prosecutor for the State of Goiás and at the Federal Public Ministry. He was Attorney General of the Republic between 1989 and 1995. He is currently practicing law.

Hamilton Dias de Souza, Master in Tax and Financial Law, is a member of the Board of the São Paulo Lawyers Institute and the Brazilian Academy of Tax Law. He was a professor of Tax Law at the Faculty of Law at the University of São Paulo.

Roberto Faldini, businessman and advisor to several companies, certified by the IBGC, institution of which he was co-founder. He presided over the Brazilian Securities Commission (CVM) and was an executive director, member of the Board of Directors and shareholder of the controlling group of Metal Leve SA

Jorge Raimundo Filho, a lawyer specializing in the areas of life sciences and regulatory law, is a partner at BRZ law firm. He made a career as a manager in the pharmaceutical sector. Advisor to companies and institutions such as Interfarma, Firjan and ETCO, he was decorated by the Queen of England with the Order of the British Empire.

Alexandre Kruel Jobim, a lawyer in Brasília, holds a Masters in Law from the University of Texas, in the United States, chaired the Brazilian Association of Soft Drinks and Non-Alcoholic Beverages (Abir) and was president of the Board of Directors of ETCO.

Luiz Fernando Furlan, businessman, former minister of Development, Industry and Foreign Trade (2003-2007), board member of BRF and Vivo, pro bono board member of various social, environmental and technology development organizations. He holds a degree in Administration and Chemical Engineering.

Tercio Sampaio Ferraz Junior, lawyer, has a doctorate in Law from USP and in Philosophy from the University of Mainz, Germany. Professor at USP and PUC-SP, he was attorney general at the National Treasury (1991), executive secretary of the Ministry of Justice (1990) and legal director of Fiesp (1981).