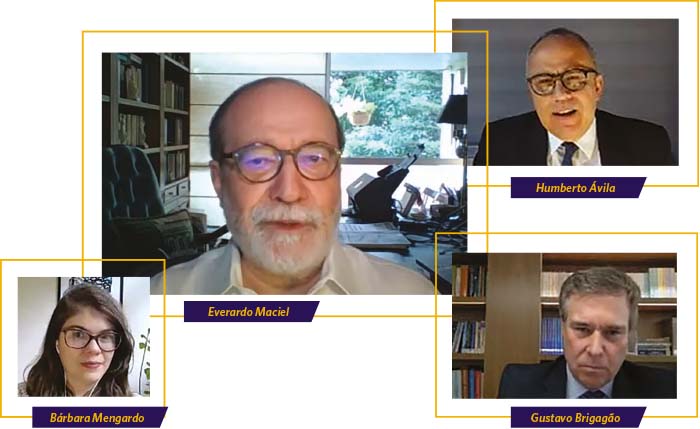 To bring together, in a law, the rights of Brazilian taxpayers that are currently distributed in different legal instruments, as a kind of Taxpayer Defense Code. This idea was discussed in the webinar The challenge for taxpayers to guarantee their rights, held in November by the Jota portal, sponsored by ETCO.

The event brought together the tax consultant Everardo Maciel, former secretary of the Federal Revenue and president of the ETCO Advisory Board, the tax expert Gustavo Brigagão, president of the Law Society Study Center and honorary president of the Brazilian Association of Financial Law, and the lawyer Humberto Ávila, Professor of Tax Law at USP. The mediation was by journalist Bárbara Mengardo.

At the opening of the webinar, the executive president of ETCO, Edson Vismona, spoke about the Institute's decision to invest in initiatives to defend the rights of taxpayers against abuses committed by the tax authorities that have been reported by Brazilian companies. He recalled that the topic appeared in the study The Challenges of Tax Litigation, which the EY consultancy carried out for ETCO in 2019. “Our initiative now is to hire a new study to address this issue. To strengthen taxpayers' rights”, he revealed.

In addition to the proposal to create the Taxpayer Defense Code, the participants discussed issues such as the modulation of the decisions of the Federal Supreme Court and the tax reform bills in Congress.
Here are some excerpts of what they said on these points, condensed for the sake of brevity. The video of the debate is available at: https://youtu.be/cPlHyHHdVeA

Collect taxpayers' rights in a law

Everardo Maciel:
“There is a great asymmetry between taxpayer rights and duties. The Brazilian state has a very clear mark of authoritarianism. The taxpayer's rights are in sparse legislation: in the Constitution, in infra-constitutional legislation. [Thus, we could think of] the construction of a statute, a code, a general law, in short, on taxpayer rights.
The great advantages of a one-piece assembly are: firstly, the visibility of being in one piece. Second, systematization, not leaving it sparsely. I think it should be a complementary law contained in the National Tax Code, bringing together, therefore, all taxpayers' rights in this piece to offer visibility and systematization.”

Gustavo Brigagão:
“I ask myself: is a Taxpayer Defense Code necessary? We have an entire chapter in the Federal Constitution devoted to constitutional limitations on the power to tax. I think it would be much more useful for the National Congress to focus on examining certain measures that would effectively improve the taxpayer's life. For example, litigation.
Why not, instead of focusing on the elaboration of a Taxpayer Defense Code, we try to improve or effectively create, for example, alternative methods of consultation solution: tax arbitration, tax mediation?”

Humberto Avila:
“In fact, the code would somehow end up juxtaposing what is laid down in the Constitution. The point that we could consider is that there is a legalistic tradition of teaching in Brazil and, unfortunately, these rights and guarantees that are normally laid down in the Constitution with a greater degree of genericity and a greater degree of vagueness need to be specified and specified through the interpretation and application. The truth is that the legal practitioners, in this huge Brazil of 5.600 municipalities, 27 state entities and the Union with its various bodies, are not good at implementing constitutional principles. Therefore, it seems to me that it would be quite opportune and convenient from a practical point of view if it were to be gathered in a document, as was done in the Consumer Protection Code, for example, certain rights and guarantees. Not to reproduce the Constitution, but to implement what is laid down in the Constitution. That is, to specify what is generic there, and to make more precise what is there.”

Modulation of effects in STF decisions

Humberto Avila:
"Modulation is not about solving money problem, it is about solving problem of law. That's the main point. When there is a very serious institutional issue that will affect the system as a whole and the credibility of the system, and therefore the taxpayer's trust in the functioning of the state, then we can admit the hypothesis of eventually modulating the effects. Now, when it comes to charging a tax not provided for in the Constitution, not returning it means encouraging non-compliance with the Constitution.”

Gustavo Brigagão:
“If we look at the effect modulations that were applied by the Supreme Court, we see that it was just a criterion: when favorable to the taxpayer, it modulates. It is contrary to the taxpayer, it does not modulate. It has always been valid. This is the criterion that hovered over most of the modulations, they were made in this way, completely pro-Fazenda, which creates all the legal insecurities we are seeing.”

Everardo Maciel:
“The modulation has to be very restricted, [but] it's an effect, not the cause. The cause is the slowness of the tax process. The average between a lower court decision and the final outcome, in constitutional tax matters at the Supreme Court, is 19 years. Now why so long? [One of the problems is] the lack of release limits. Anything can be released, from then on the problem is for the taxpayer. And that, if you want to go to the Judiciary, you have to offer guarantees.”

Everardo Maciel:
"None of the proposals – PEC 45, PEC 110, the reform of the Income Tax, the project for the creation of the Contribution of Goods and Services – is concerned with the taxpayers' rights. We've turned it into a wild jungle here, as Dante Alighieri used to say. Where each one tries to take his piece and get rid of. And each one, when placed in this situation and later removed, behaves, as Roberto Campos said, like a concentration camp violinist: 'I saved myself, let others have their problems'.”

Gustavo Brigagão:
In the tax reform projects there is nothing to ensure the taxpayer's right, on the contrary, there are some distortions of some principles, as in the project of both PEC 45 and PEC 110, on the issue of non-cumulativeness. There is nothing in the tax reform bills that are in Congress aimed at protecting taxpayers.”

Humberto Avila:
“These projects were prepared in the interest of the States, they promote the simplification of injustice, increase the tax burden and increase legal uncertainty. The subject needs to be better discussed. Without passion, but focused on balance, on a symmetry between the prerogatives of public entities and the rights and guarantees of taxpayers.”