Former president was honored for his 90 years of age and his contribution to Brazil, spoke about the reconstruction of the country after the pandemic and answered questions from councilors 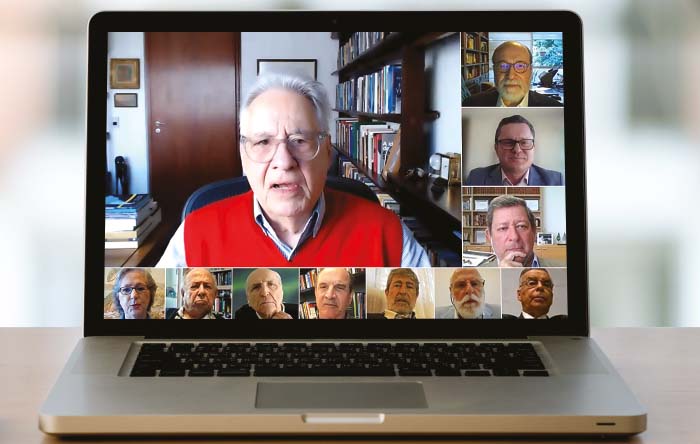 ETCO Advisory Board meetings usually always have a distinguished guest to share their knowledge and vision of the future with the Institute's advisors. The July 2021 meeting had a more than special presence: former president Fernando Henrique Cardoso. A month after turning 90 years of age, he was honored by ETCO for his long history of contribution to Brazil as an intellectual, politician and president of the Republic for two terms. He then spoke about his expectations for the country after the end of the pandemic and answered questions from the Institute's advisers.

At the opening of the meeting, the chairman of the Advisory Board, Everardo Maciel, recalled his work alongside FHC as secretary of the Federal Revenue during his two terms in office. “For me it was a great honor to serve in your government,” he said. Then, the executive president of ETCO, Edson Vismona, read the text of the commemorative plaque signed by him, by Everardo Maciel and by the chairman of the Board of Directors of ETCO, Delcio Sandi, sent to FHC:

“Our gratitude for your profound collaboration for the political, economic and social development of the country. The democratic, tolerant posture and the dissemination of wisdom throughout its 90 years inspire us and are a true example for all Brazilians.”

In his speech, FHC underlined the seriousness of the health crisis that the world has been going through since the beginning of 2020. “In my entire life, I have never experienced a crisis like this”, he said. He lamented the lost lives and the negative impacts on the economy and employment. “The economic effects could last for some time,” he predicted. But at some point, according to him, the world will return to normality: “Human beings have this ability to persist and survive. One of the faculties that human beings have is to forget”.

Ship with strength to overcome the waves

The former president highlighted the need for the country's recovery process to be led by leaders who are able to demonstrate confidence in the future and inspire people in this regard. "That depends on having leaders in Brazil capable of expressing a feeling that will take the country forward", he summed up.

According to FHC, people like that are needed at the moment. “Today, I have the feeling that we are on a ship with somewhat slow machines. It seems that we are afraid of the wave. We have to return to normality in the sense that, yes, there is a wave, it will continue to exist, but the ship has strength and goes ahead”, he explained.

In the question session, councilor Luiz Fernando Furlan wanted to know if FHC felt the lack of great political leaders nowadays. The former president replied that he was and recalled the importance that names like Ulisses Guimarães, Mário Covas and Franco Montoro had in the past. “There is a lack of people who have the capacity to create a future for all of us”, he stated.

Councilor Marcílio Marques Moreira asked FHC's opinion on the proposal circulating in Brasília to adopt a hybrid government regime in Brazil between presidentialism and parliamentarism. “I was very supportive of parliamentarism, but today I'm more skeptical,” he replied. “There are no strong parties in Brazil. Our system is very much based on trust in people.” The former president expressed doubts about the ability of the National Congress to lead a country with the diversity of Brazil.

Counselor João Grandino Rodas recalled the importance of FHC also as minister of Foreign Affairs, shortly before assuming the Ministry of Economy and launching the Real Plan. Aristides Junqueira, former Attorney General of the Republic, praised the attitude of respect that the former president has always shown towards the Federal Public Ministry.

Ellen Gracie Northfleet, who was STF minister by FHC's nomination and retired after completing eleven years in the position, by her own decision, wanted to know the former president's opinion on the adoption of mandates in the Supreme Court, instead of the current model that establishes compulsory retirement only at 75 years of age. In her opinion, the period should not exceed ten, twelve years. "It's enough for anyone to make their own jurisprudence, to leave a mark on the house", justified the former minister.

FHC said he agreed with the proposal: “After a long time, it gets tired, people repeat themselves. You have to make room. You cannot hold a role for long. You fossilize and prevent others from appearing. Ten years at the Supreme is good”.

Councilor André Franco Montoro Filho praised FHC's role in strengthening democratic institutions in the country, especially in the elaboration of the 1988 Constitution and in his eight years as president. FHC thanked and recalled the importance that Franco Montoro, André's father, had for his education as a politician and for the country.

At the end of the Consultative Council meeting, the executive president of ETCO highlighted a common quality of great public figures like FHC: the defense of the national interest. “We need to revive that in this country,” he said.