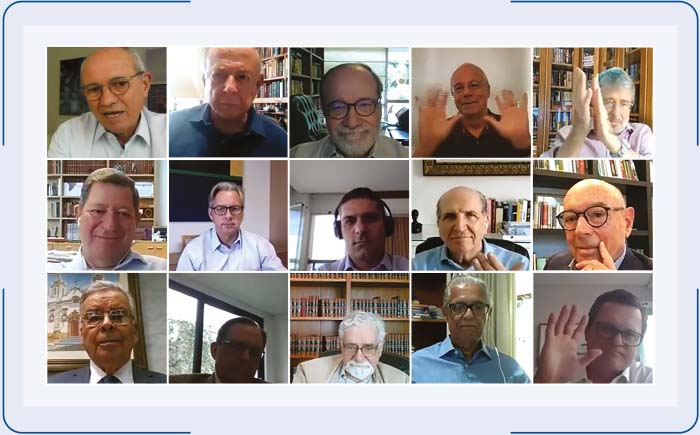 Hartung and Marcílio (top left): inspiration for the other board members

It was in a very special atmosphere, of homage to a great public man and reflections on the future, that ETCO held the last meeting of its Advisory Board in 2021, on November 26th. The honoree was the diplomat, former Minister of Economy, former president and current member of the ETCO Advisory Board, Marcílio Marques Moreira, who the day before had completed his 90th birthday.

Present at the meeting, he was congratulated by the other counselors and by the guests who attended the meeting. One of them, journalist and diplomat Pedro Luiz Rodrigues, is the author of the profile on the first decades of Marcílio's career published in this edition of ETCO Magazine.

Reflections on the future came from another distinguished guest, Paulo Hartung, from Espírito Santo, who governed Espírito Santo for three terms, was a senator, federal deputy, mayor of Vitória and state deputy in one of the most successful political careers in the country. took to the ETCO Advisory Board meeting, held in virtual format, a representative of what he called “Marcílio’s Espírito Santo bench”, Ambassador José Carlos da Fonseca Júnior, who also paid tribute to his former master at Itamaraty, with whom he worked in Washington.

At the request of the chairman of the ETCO Advisory Board, Everardo Maciel, Hartung gave a presentation on the political situation in the country, the prospects for next year's presidential elections and the future of the reforms necessary to accelerate Brazilian development. He then answered questions from board members André Franco Montoro Filho, João Grandino Rodas and Hoche Pulcherio, the chairman of the Board of Directors, Delcio Sandi, and the executive chairman of ETCO, Edson Vismona. Below are some excerpts from Hartung's speeches, condensed in the name of brevity:

We are in an extremely complex, challenging phase of national life. I think the best example for this is to go back to the 7th of September, an important day in our cultural traditions. I belong to a generation that fought, took to the streets to bring democratic institutions back into our daily lives. I confess that I did not imagine that in life I would have to mobilize again in the defense of democratic institutions.

We had an atypical election in 2018. She had a very strong mark, which was superficiality in terms of not discussing Brazilian problems. The country has evolved in a certain political polarization that is profoundly impoverishing the quality of public debate. We need to somehow get out of this trap in the next election.

We have two strong characters, but translating them to the election results is precipitation. I saw surveys: the number of Brazilians looking for another alternative is also very expressive. In politics, you need three elements to make a project stand: space, and space we have; time, and in my view there is more than enough time; and a character who manages to capture and capitalize on this feeling that is present in society today. If by April we manage to place a relevant alternative candidacy, we will change the succession debate on 22. I have moderate optimism that we will be able to put it on its feet. I hope we can be successful. And success is not about winning the election. Winning an election is very good, but at least we can influence the debate in our country.

Between the right and the easy way

We have not managed to transform our potential into an opportunity until today because most of the time when we arrive at the crossroads between the right path and the easy path – of demagoguery, populism, short-term vision – we choose the right path. easy way.

About the Brazilian political system

In recent years, we have addressed a mini-political reform that, if maintained, will produce good results. The combination of a performance clause and the non-existence of a proportional coalition will lead to an important instrument, which is the reduction of political parties. The merger of the DEM with the PSL is already the first step of many mergers that we will see after this electoral process. This facilitates this relationship of governability in the country. Having a smaller number of parties, you will have a tendency for the parties to seek a programmatic political contour that they have been losing over time.

District voting is good, but not now

I'm a fan of mixed district voting. But when you look at the set of things that need to be done in the country, this is not the time to mobilize that Congress to discuss a change in the rules of the game. We have already reached the limit of what was possible: ending the coalition in proportional terms. Now it's time to consolidate it. From the point of view of political institutions, to expect this reduction in the number of parties, and perhaps in the future to address an improvement in the quality of the vote and social control over those elected.

What we need to address fast is a reform of HR in the Brazilian public sector. If we manage to regulate article 34 of the Constitution, which was implemented in the FHC administration, and exchange what we call automatic progressions and promotions for a performance evaluation process, we will take a leap in quality in the public sector, especially if we do this in the Executive, the Legislative, the Judiciary, the Public Prosecutor's Office, the Courts of Accounts, the Public Defender's Offices.