The informal market declined slightly in Brazil in 2020. The most likely reasons are related to the restrictions on economic activity caused by the coronavirus pandemic and the programs created by the government to protect the employment of those with a formal contract and to compensate the losses of workers informal.

These are the main conclusions of the 2020 edition of the survey that measures the Underground Economy Index (IES) in Brazil, held in partnership between ETCO and the Brazilian Institute of Economics of the Getulio Vargas Foundation (IBRE/FGV). According to the study, released in December, the informal market moved R$1,2 trillion last year, an amount that corresponds to 17,1% of the Brazilian GDP. In 2019, the rate had been 17,3%. 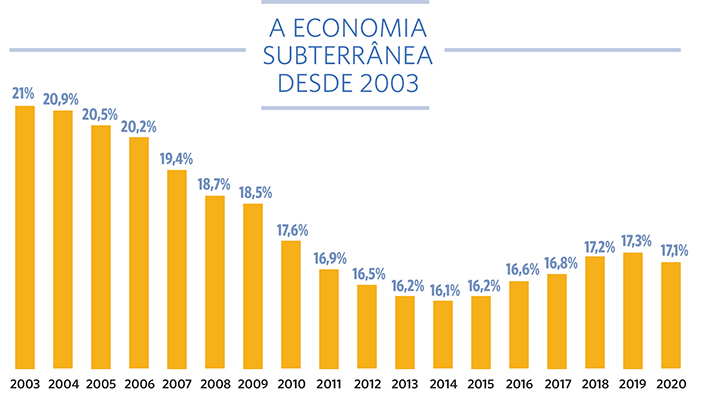 The setback interrupted a five-year cycle of elevation in the shadow economy, caused mainly by the long period of recession that the country went through between the second quarter of 2014 and the fourth quarter of 2016.

The ETCO and Ibre / FGV research has followed the evolution of the informal economy since 2003, when its share of GDP showed the highest level in the series: 21%. In the following years, the index registered uninterrupted declines until 2014, when it reached the historical low of 16,1% of GDP. The virtuous cycle reflected the growth of the economy in that period and regulatory advances that favored the formalization of business and jobs, such as the Individual Microentrepreneur (MEI) program and the Simples tax regime.

Fall by the pandemic

For ETCO's executive chairman, Edson Vismona, the reduction in the index in 2020 is not a cause for celebration. "The necessary restrictions on movement during the most critical months of the pandemic took people off the streets, damaging not only formal but also informal trade," he said. "All economic activity was stopped abruptly, and this had a strong economic and social impact."

Economist Paulo Peruchetti, from Ibre / FGV, recalled that the activities performed by formal workers were protected through the Emergency Benefit of Preservation of Employment and Income. Informal workers received Emergency Aid, which ensured income, but not work.
For this year, Peruchetti predicts the opposite movement. "As it is more flexible, the recovery of employment over the year is likely to occur due to stronger increases in the informal labor market, which may reverse the decline in the underground economy indicator in the coming years," he says.

The informal market measured by the Ibre / FGV survey comprises all economic activities carried out without the knowledge of the government, which do not pay taxes or are subject to official regulations. The index is calculated based on two variables: the amount of paper money in circulation in the country, whose increase is usually associated with the growth of the informal market, and the data referring to the employment of the National Household Sample Survey (Pnad) from IBGE .