The Executive President of ETCO, participated last Monday (22) in a technical meeting at the headquarters of the Federal Police of Foz do Iguaçu. The meeting is part of the operational audit that is being carried out by TCU to assess governance aspects of Brazilian immigration policy and assess the extent to which the country has effective planning and concrete actions for the protection of Brazilian borders.

On the occasion, Minister Augusto Nardes, from the Federal Court of Accounts, presented a two-year review of the Federal Policies for the Border report, released in 2015 and which presented a critical scenario for public policies aimed at Brazilian borders. Among the conclusions of the work, the minister pointed out that the country does not have institutionalized policies in law to guide, in an integrated way, governmental action related to border issues; the low degree of investment; and the lack of human, material and financial resources of the agencies responsible for the prevention, control, inspection and repression of border crimes. 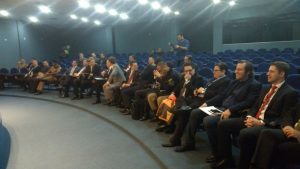 Two years after the report was released, very little was done to reverse this situation, and Brazilian borders are increasingly vulnerable to criminal organizations that dominate activities such as drug and arms trafficking and the smuggling of cigarettes, medicines, toys and others problems.

In recent years, even in the midst of the serious global economic crisis, the flow of Brazilian international trade has grown by more than 70%, expanding the volume of imports and exports at ports, airports and border posts across the country. The number of vehicles and people crossing our borders has also grown.

The expansion of the flow of people, goods and vehicles entering and leaving the country through ports, airports and border points also poses other challenges and requires the improvement of the means of control carried out by the State. Because, it was not just the legal flow of goods that grew. In recent years, seizures of smuggling, embezzlement, drugs, weapons, ammunition and other goods that have entered the country illegally have also grown.

Even in the face of numerous difficulties such as the lack of servers in the units that carry out inspection and customs control, in 2015, according to the last Customs Balance released by the IRS, 3.144 surveillance and repression operations against smuggling and embezzlement were carried out, which resulted in the seizure over R $ 1,8 billion in goods. In 2015, there was an increase of 43,16%, compared to 2014, in the seizure of arms and ammunition. There were also, in the same year, Geraldo Seixas.jpgaprehensions of 2,4 tons of marijuana and 1,7 tons of cocaine, results that reinforce the role of the Federal Revenue as an institution linked to the fight against cross-border crimes and to confront security threats, materialized by crimes such as smuggling and drug trafficking.

Recent research shows that Brazil loses billions of reais every year due to under-invoicing of exports and over-invoicing of imports, with smuggling and embezzlement. O Competition Ethics Institute (Etco) and the National Forum Against Piracy and Illegality (FNCP) estimate that Brazil loses, with tax evasion and other losses caused by smuggling, R $ 100 billion a year. The report produced by Global Financial Integrity (GFI) estimates that from 2003 to 2012, Brazil lost US $ 217 billion, about US $ 21 billion a year, due to crimes of corruption, money laundering, but mainly through under-invoicing of exports and over-invoicing of imports.

The Institute for Economic and Social Development of Borders (Idesf) showed that the federal government stopped collecting R $ 10 billion in Tax on Industrialized Products (IPI) and Import Tax (II), between 2011 and 2014, due to smuggling . Idesf concluded that the collection of only these two taxes would increase by R $ 3 billion annually if Operation Agate - an integrated effort of the Armed Forces and more than forty inspection agencies, including the Federal Revenue Service - occurred without interruption during the entire period. year. According to the study, expenditure on the Operation is approximately R $ 1,1 million per day, or R $ 401,5 million per year.

It is not a question of expanding the collection, but of providing State institutions with the necessary capacity to act as a facilitator of international trade and, at the same time, expanding the means of inspection and control, strengthening the fight against cross-border crimes such as smuggling, diversion and drug trafficking, reducing the inflow of weapons that are used by organized crime. Actions, therefore, that are directly associated with the reduction of violence.

In this sense, we urgently need to bring the debate on border control to the national agenda. We can no longer be held hostage by dramatic events such as those that occurred in São Paulo, Rio de Janeiro, Espírito Santo, Rio Grande do Norte and more recently in Amazonas, when organized crime promoted attacks on police forces, started to control areas of large cities and to promote massacres in prisons as demonstrations of power. Now, the focus is on the lack of border control in the northern region, which has allowed criminal groups to take advantage of the weakness of enforcement to control drug trafficking.

As a way of contributing to this debate, over the past few years, the Tax Analysts of the Federal Revenue have promoted several actions. More intensely, since 2010, with the project “Fronteiras Abertas”, we have denounced the abandonment of borders. Now, to measure the challenge that is to control the flow of international trade that occurs through the country's ports, airports and dry borders, the Tax Analysts of the Federal Revenue of Brazil launch the “Frontier”. With this new tool, Tax Analysts present projections of the volume of cargo, people and vehicles entering and leaving the country, giving society an idea of ​​quantity at the exact moment the consultation is made.

With the “Frontier” we also show the importance of customs inspection and control, and the challenges imposed by the growth in the flow of trade. We intend to broaden the debate on the importance of inspection and control actions at our borders and show the dimension of the challenge faced by the agencies that work in border control and foreign trade. Certainly, tackling violence will only be effective in the country when society and the authorities understand that border control should be seen as a priority on the national agenda. We know that the State exists to provide answers to some basic obligations: comply with and enforce the law; exercise authority (never authoritarianism); collect taxes and fees and manage public resources (with exception); and provide services (permanent and with quality).

The scenes abundantly shown on television at the beginning of this year make us doubt the role of the Brazilian State. They attest to barbarism in prisons in Brazil, demonstrating, on the one hand, the presence of criminal organizations and, on the other, the absence of the State, unable to promptly act in the discharge of its duties.

As a spectator, he watched the action of the criminal factions, fearful of taking control of the chaotic situation - as if the absence of public administration in maintaining public order was permissible, thereby ignoring their primary obligations.

This omission is shameful. It is true that the federal government, in the face of disaster, after assessing the situation, put forward the presentation of yet another national security plan. The question is: how long will we discuss plans without effective implementation? The diagnosis is known: in the absence of the State, crime occupies the space and has acted with great organization and fearlessness. In addition to prisons, action is urgent. From the borders to the cities, we have organized crime occupying spaces and earning billions of reais from smuggling (especially cigarettes), drug trafficking, weapons and ammunition, piracy, evasion, fraud in the sale of fuel, forgery of products and documents .

By seeking insertion in public institutions - which happens through active participation in the election of political representatives and also by the enticement of authorities (police and judicial) - criminal organizations are increasingly adding power, rivaling public power, which the main author becomes a mere supporting role.

The State, with the participation of civil society, urgently needs to organize itself to disorganize crime. There is no point in preparing plans and more plans if the premises of occupying spaces and fighting for real organized criminal action, which basically seeks to make money, are not carried out. The lower the risk, the better for criminals. The struggle is for the State to reduce the scope of criminal activity - which perverts the very existence of public power -, fighting it and cutting off its sources of financial resources. Recently, the Brazilian Institute of Competition Ethics (ETCO) and the National Forum Against Piracy and Illegality (FNCP) participated in a meeting at the Ministry of Justice and Citizenship discussing actions to combat theft and theft of vehicles and cargo and presented 21 proposals to assist in the urgent definition of strategies to fight against crime, especially at the borders.

Adopting a systemic and systematic vision, fundamentally, the following were suggested: the integration between the intelligence of the police forces (federal and state), the Federal Revenue, Coaf, Abin and the Armed Forces, identifying the most critical points and implementing cooperative actions; investment in control technology and human resources, enabling prompt repression response; identification of suspicious financial transactions, using the means to suppress them; implementation of a navigation monitoring system in the Itaipu lake by the Navy; development of Action Plans with border countries and legislative updating.

These proposals are in line with years of assessment of the criminal phenomenon. It is proof of incompetence to think that only with specific police actions will it be possible to fight crime. We have to overcome the idea of ​​the State sharing and assume integration and collaboration, with permanent actions. This mission is not of any isolated public organization, it is of all. Along with police actions, it is essential to cut off the criminals' means of financing, and this involves combating not only drug and arms trafficking, but also smuggling, persistent evasion, fraud, counterfeiting and piracy.

With the erosion of ethics and non-compliance with laws, we lose the support of institutions and the possibility of sustainable economic growth. As an answer to the question in the title of this article, we need a State that is effective in fulfilling its obligations. It's time for quick, coordinated action. In short, it is time for quick and coordinated action. We are already late and tasked with acting in the midst of chaos.