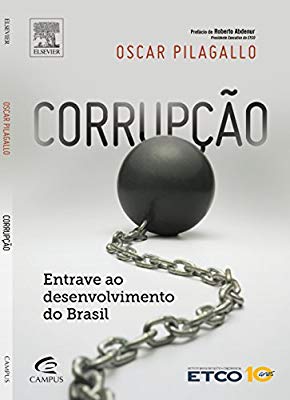 Corruption news is becoming more and more constant in Brazil, causing disgust and revolt among the Brazilian people. Its impact goes far beyond the headlines and generates a large and still little-known effect on the country's economy.

In the book Corrupção - Barrier to the Development of Brazil, journalist Oscar Pilagallo shows the path taken by society to reach the current stage and shows what must be done to change the national political scenario. With both a historical and prospective approach, the book treats corruption primarily as an obstacle to economic development because it subtracts resources from public policies, causes distortions in the business environment and strengthens the culture of leniency with transgressions.

The work was built from the compilation of lectures presented at the seminar “The Impact of Corruption on Development”, conducted by ETCO, in partnership with the Valor Econômico newspaper, in August 2012, in São Paulo, which brought together representatives from various sectors Brazilian economy and society around the theme.

Former STF Minister Ellen Gracie, journalist Oscar Pilagallo and ETCO Executive President, Roberto Abdenur, highlighted the importance of the theme in the launch of "Corruption - Obstacle to the Development of Brazil" The launch of the book “Corruption - Obstacle to the Development of Brazil”, on August 14 in São Paulo, brought together in a round table the former Federal Supreme Court minister Ellen Gracie Northfleet, the journalist and author of the book, Oscar Pilagallo , and ETCO Executive President Roberto Abdenur. At the meeting, they stressed that the impact of corruption affects not only the economy, but the entire Brazilian society.

“Today, corruption is more easily located, Brazilians are more aware of its existence and there are more instruments to fight it,” said Ellen Gracie.

Among the instruments to combat this evil is the Anti-Corruption Law, which allows companies - and not just their representatives, individuals - to punish acts against public administration. The text guarantees the compensation of the damage caused to public coffers by acts of improbity. Proposed by the Executive Branch, and with federal deputy Carlos Zarattini (PT-SP) as rapporteur, the law was signed by President Dilma Rousseff on August 1, with three vetoes. Because of these vetoes, it goes back to Congress.

"Our law is broader than in many other countries," said Abdenur. The issue is to streamline the processes in court. In the United States, according to Abdenur, a case of corruption is tried in a maximum of one year, whereas in Brazil, it takes up to a decade.

The Mensalão trial also represents an advance in the fight against corruption, the debaters agreed. Ellen Gracie noted that it was the first case heard only by the STF. To an attentive audience, he explained why he believes there will be no retrial. But he stressed that the defendants' right of defense must be respected and preserved. "The Judiciary is not a machine to condemn, it is a machine to judge."

Both Ellen Gracie and Abdenur and Pilagallo mentioned the popular demonstrations started in June in Brazil, which presented the fight against corruption as one of their flags. The minister recalled that, according to the surveys, 82% of Brazilians supported the protests. "The main banner was urban mobility, but also health, education and the demand for an effective fight against corruption." For her, the desire to keep the movement away from political parties also deserves to be highlighted.

For Pilagallo, the increase in the education level of Brazilians has led to a greater perception of corruption and indignation against this misconduct. "Young people have access to new means of information and form a more acute critical conscience," he said.

But Pilagallo, who delved into the subject to write the book compiling the debates at the seminar held a year ago by ETCO in partnership with the newspaper Valor Econômico, contextualized the perception of greater corruption. “They say that corruption has increased a lot. It may even have increased, but we have no concrete basis for making this statement ”, he observed. "Brazil is not among the most corrupt countries in the world, according to data from the NGO Transparency International."

The Transparency International Corruption Perception Index, published since 1995, showed that in 2012, when the Mensalão trial began, Brazil ranked 69th out of 176 countries analyzed. With 43 points, slightly below the international average of 43,3 points, the country shared with South Africa the leadership among the BRICS, and ranked 3rd in South America. Among the BRICS, China ranked 80th place, India in 94th and Russia, in the lantern, in 133rd. In South America, the two best ranked countries were Chile and Uruguay, both in 20th place. Brazil was well ahead of countries like Peru (83rd), Colombia (94th), Argentina (102nd), Bolivia (105th), Ecuador (118th), Paraguay (150th) and Venezuela (165th).

Pilagallo recalls that much has been done in Brazil since the mid-1990s to combat corruption, but much more remains to be done. Greater transparency and accountability of governments and companies, intolerance of situations of transgression and elevation of democratic rates - all of these are fundamental in the fight against corruption.

Listen to the interview given by Roberto Abdenur, ETCO's Executive President, to the CBN Madrugada program on July 24th. The book will be released on 14/8 "Corruption - Obstacle to the Development of Brazil", a joint publication by the Brazilian Institute of Ethics in Competition (ETCO) and the publisher Elsevier (*).

In the work, journalist Oscar Pilagallo compiles the lectures given by ETCO in August 2012, in partnership with the newspaper “Valor Econômico”, about the impact of corruption on economic development.

According to the organizers, the news about corruption, more and more constant, causes disgust and revolt in the population, but its impact goes far beyond the headlines and generates a great and still little-known effect on the economy.

In a historical and prospective approach, corruption is treated in the book as an obstacle to development: it subtracts resources from public policies, causes distortions in the business environment and strengthens the culture of leniency with transgressions.

“We hope, with the publication of this book, to contribute concretely to the strengthening of this fight, to the improvement of our society and institutions in Brazil”, says Roberto Abdenur, executive president of ETCO, who signs the preface.

The launch of the book, with an autograph session, will be preceded by a debate with the participation of the author, former Supreme Court Justice Ellen Gracie, and ETCO's president and directors.

ETCO is a public interest civil society organization (OSCIP) founded in 2003 with the objective of identifying, discussing, proposing and supporting actions, practices and projects that result in a concrete improvement of the business environment in Brazil.

Oscar Pilagallo is the author of the books "História da Imprensa Paulista", "A Aventura do Dinheiro", "Direito e Economia" and "Tributo ao Mercado", among others.

In August 2012, ETCO held the international seminar The impact of corruption on development, in partnership with the newspaper Valor Econômico, bringing together representatives from different sectors of the Brazilian economy and society.

The discussions produced at this seminar provided material for journalist Oscar Pilagallo to write the book Corruption - Barriers to Brazil's Development. The book shows that corruption is both a factor and a justification for misconduct. Tax evasion, illegal trade and informality, for example, are manifestations, or consequences, of various forms of corruption, active or passive.

The book will be released on August 14, at Livraria da Vila at Shopping JK Iguatemi, in São Paulo. A debate on the topic of Corruption will precede the signing session and will be attended by the author of the book, the Executive President of ETCO, Roberto Abdenur, and the former Minister of the Supreme Federal Court (STF) Ellen Gracie Northfleet, who attended the seminar that gave rise to the book. 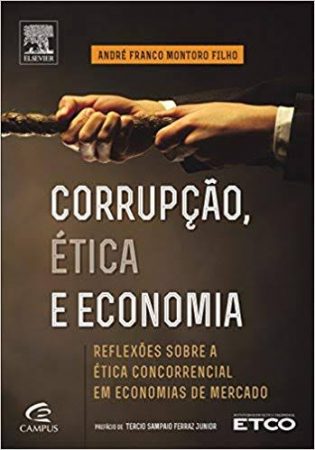 In the last five years, André Franco Montoro Filho has devoted himself to studying both the advantages of ethical behavior and the social and economic losses caused by corruption, tax evasion and other types of transgressions. Gathering writings that the author produced over the years, this work highlights the importance of ethics in a troubled economy and the enormous losses caused by the general perception of corruption in institutions. The author covers issues such as competitive ethics, the role of law, deviations from corruption and dissatisfaction with purely legislative solutions. Through short texts and sharp reflections, Montoro demonstrates the triggering of very real forms of economic and social inequality, bureaucratic imbalance and legal distortion, behavioral dysfunctions and corruption, which prove a split between ethics, politics and law. Its main objective is to offer readers viable ways to overcome these problems.