ETCO participates in the 67th ENCAT in Manaus 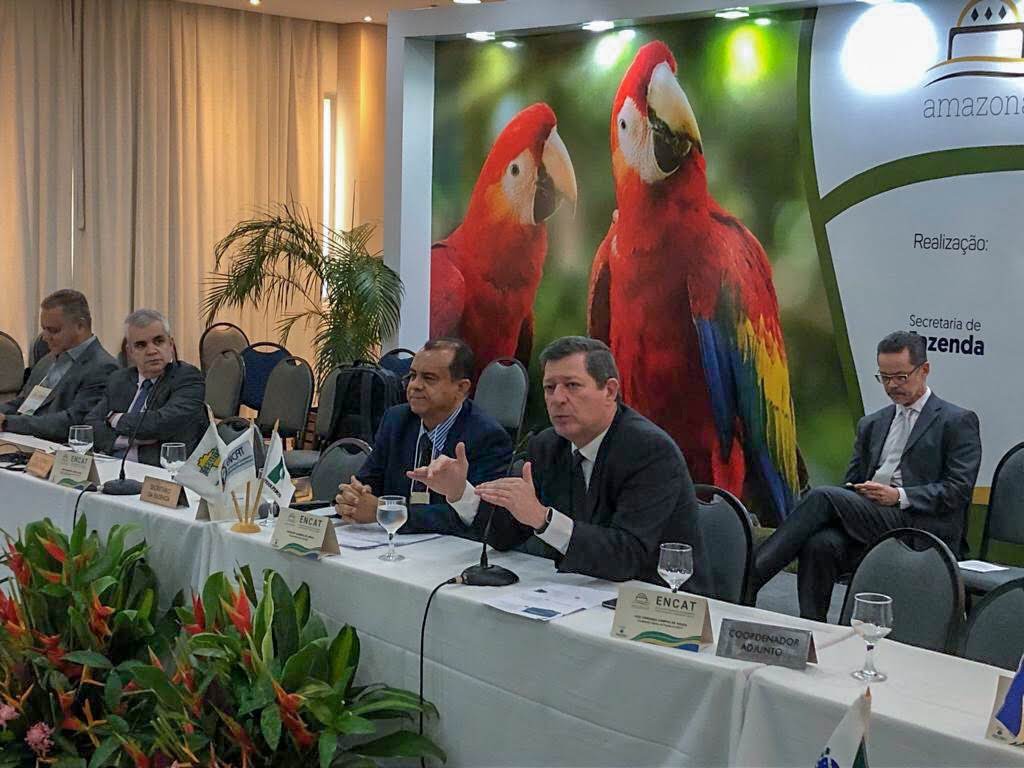 ETCO has been supporting ENCAT - National Meeting of Tax Administration Coordinators for many years, which brings together tax agents from all Brazilian states.

In its 67th Edition, held in Manaus, the executive president, Edson Vismona, presented the proposals defended by ETCO on the tax system and received a commemorative plaque for the issuance of 55 billion electronic invoices, a project that had the initial support of ETCO in its launch.

The sustainability of the Manaus Free Trade Zone

The meeting, under the coordination of the State Secretariat of Finance (Sefaz-AM), brought together representatives state farms to discuss the survival bases of the Manaus Free Trade Zone (ZFM), which is the largest regional development model in the country.

The meeting brought up the debate about the imminent tax reform in the country, reflecting its impacts on regional economic inequalities, especially in the already consolidated and successful model of the Manaus Free Trade Zone.

In addition to finance secretaries, the event was attended by representatives of professional associations, the president of ETCO and tax experts inside and outside Brazil. The Amazonas Finance Secretary, Alex Del Giglio, opened the event with the lecture "The Importance of the Manaus Free Trade Zone for the Growth of the Country".

In the lecture, Alex pointed out that, of the more than five thousand Brazilian municipalities, Manaus is the 13th city that most collects federal taxes in the country, showing that, despite the tax incentives, the Free Zone is responsible for an important slice of the Brazilian tax collection . The secretary also spoke of the importance of the technical and political exchange promoted by Encat, which in Amazonas was promoted by Sefaz-AM.

“This meeting is very important for all states of the federation, especially for Amazonas. It is a unique opportunity to demonstrate once again the relevance of the Zona Franca model not only for the country, but for the world ”, declared Del Giglio, emphasizing the role of the model in the economic and social development of the region, but also in preserving the largest planet's ecosystem.

Sustainable development and ZFM - According to the secretary, thanks to the Free Zone, the Amazon maintains about 97% of the state's vegetation cover preserved, guaranteeing the rain cycle in the south and southeast that make the country the largest agricultural granary in the world. “The Free Zone delivers much more to the country and the world than it receives. For each real invested in tax incentives, the per capita income of the local population is about 1,14 ”, he said, citing data from a recent study by the Getúlio Vargas Foundation (FGV).

The national president of Encat, Eudaldo Almeida de Jesus, reaffirmed the commitment of the other federative entities to the maintenance of the Free Zone. "As long as there is no other way, we have to protect what is ours," he said. He also highlighted the importance of the meeting in the search and sharing of solutions for state tax authorities and highlighted the Amazonian contribution in this process.

Pioneer Amazon - “The state of Amazonas was the first state to issue the consumer invoice (in Brazil). He's our first-time partner. Its technicians are of high capacity and are also focused on first-world technology. Much of what was done in the country in electronic tax documents was with the contribution of the state of Amazonas ”, declared the president of Encat.