Pandemic affects informal activity in Brazil and brings down indicator

Pandemic affects informal activity in Brazil and brings down indicator

Underground economy in Brazil, moved something close to R $ 1,2 trillion reais, higher than the GDP of countries like Switzerland and Sweden

The underground economy suffered a small drop in participation in the Brazilian economy and reached 17,1% of GDP, which represents about R $ 1,2 trillion reais. The result is part of the Underground Economy Index (IES), a partnership between the Brazilian Institute of Ethics in Competition (ETCO) and IBRE / FGV that has been monitoring, since 2003, the evolution of activities that operate outside the laws and regulations that affect formal activities in the country.

The indicator, slightly lower than that observed in 2019 (17,3%), points to an interruption in the successive increases observed since 2015, caused by the events associated with the covid-19 pandemic that raised the level of uncertainty in an extraordinary way in relation to the performance of the economy.

The negative impacts on economic activity and the labor market affected informal workers more intensely, compared to formal workers, contributing to the fall of the Underground Economy Index (HEI) in 2020.

According to Edson Vismona, president of ETCO, the drop observed in the index, unlike what happened in the past, is not associated with the increase in formal activity.

“It is a reduction that we cannot celebrate. Circulation restrictions during the most critical months of the pandemic have taken people off the streets, significantly disrupting street vendors, application drivers and informal traders. This population had its activity stopped abruptly and this brought a strong economic and social impact ”, completes the executive. 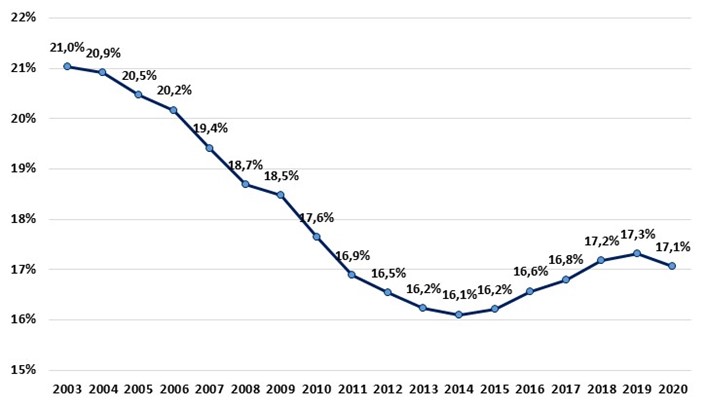 The Graph shows the evolution of the Underground Economy Index since 2003 - Source: Prepared by ETCO and FGV / IBRE

Making a historic rescue, the highs observed in the indicator up to 2019 were a consequence of the crisis that started in mid-2014, which reduced the formal sector of the economy, and the slow recovery of economic activity, concentrated in its most flexible part the informal economy , which was pulling jobs in the country. At the same time, the reduction in interest rates and the slow increase in income alleviated the growth situation in the shadow economy, which would be stronger in the absence of these factors.

IBRE / FGV economist Paulo Peruchetti believes that the current crisis, with unique characteristics, the formal worker was more protected, mainly due to the Emergency Job Preservation Benefit (BEm). Regarding informal ones, the emergency benefit guaranteed income, but not employment.

“As it is more flexible, the recovery of employment over the next year is likely to occur due to stronger increases in the informal labor market, which may reverse the decline in the underground economy indicator in the coming years”, concludes Peruchetti .

Vismona and Peruchetti agree that structural factors that led to the reduction of the underground economy between 2014 and 2019 remain present in the Brazilian economy, but that caution is needed when assessing the evolution of the indicator, as its dynamics will depend on the speed of economic recovery, which advancing the reforms necessary to stimulate the economy.

Evolution of the Index

ETCO and IBRE / FGV developed an index to monitor the underground economy, providing an indicator of the evolution of informal activities. The underground economy is defined as the production of goods and services not reported to the government, deliberately, to: evade taxes; evade social security contributions; circumvent compliance with labor laws and regulations; avoid costs arising from the rules applicable to each activity.

The index starts in 2003, with the highest value in the historical series, about 21% of the Brazilian GDP and since then, it has presented a strong downward trend, reaching in 2014 its lowest value (16,1%). However, as of 2015, however, there was a worsening in the indicator, with an increase of more than 1 percentage point between 2015 and 2019.

The reduction in the index in the country in the 2000s is related to several structural factors that stimulated the formalization of the labor market and made it difficult for companies to operate outside the law. Among the factors that helped to increase the formalization of the economy, we can mention the increase in the credit market and the expansion of the average schooling of Brazilians.

In addition, measures to simplify legal standards help to reduce the cost of formalization, stimulating a reduction in the shadow economy. In this sense, measures with the implementation of electronic invoices (NFes), SIMPLES and MEI tend to formalize the economy more.

Between the second quarter of 2014 and the fourth quarter of 2016, Brazil faced a long period of recession (11 quarters) according to the Economic Cycle Dating Committee (CODACE). One of the consequences of this loss of dynamism in the economy was the increase in the number of people engaged in informal activities.

Between 2016 and 2019, there was a recovery of employment, albeit informal, whose work relations are much more flexible, generating increases in the number of people without a formal contract and in the share of this group's income in the total income.

Therefore, the increase in informality observed in this period made the impact via the labor market greater, thus leading to successive increases in the Underground Economy Index between the years 2015 and 2019.

In the year of 2020, it was possible to notice a decrease of 0,2 percentage points in the indicator, explained by the change in the composition of the labor market, with a greater weight of formalization, combined with the expectation of a strong reduction in the level of economic activity. This value observed in 2020, shows that the underground economy in Brazil, moved something close to R $ 1,2 trillion reais, greater for example than the GDP of countries like Switzerland and Sweden, which correspond to something close to 16% of the Brazilian GDP , according to IMF data.

The drop in the indicator in 2020 is associated with a change in the composition of the labor market. With the advance of the Covid-19 pandemic, there was a greater relative reduction in informal workers compared to the drop observed in formal workers, which generated an increase in formalization.

The positive side is that the structural factors that led to the reduction of the underground economy remain present in the Brazilian economy. The process of simplifying rules and regulations remains active (with prospects for expansion by the current government), the average schooling of Brazilians continues to increase and the credit market should return to its growth trajectory. In addition, the labor reform carried out in the previous government tends to stimulate the formalization of the labor market, reducing the relative cost of formalization, stimulating the return of formal employment.