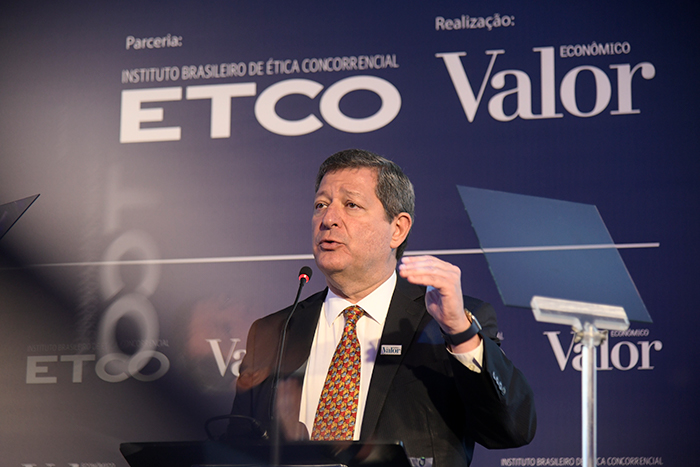 The Brazilian tax system needs changes that value good taxpayers, fight the persistent tax debtors and correct specific problems in sectors that suffer unfair taxation competition, such as cigarettes, beverages and fuels. These were the main points defended by ETCO's executive president, Edson Vismona, at the Taxation in Brazil seminar.

He also recalled ETCO's participation in the approval and implementation of important projects to combat tax evasion in the country. He cited the implementation of physical control systems for the production of beverages and cigarettes, the approval of article 146-A of the Constitution, which authorized treating in a tougher way taxpayers who use illicit tax advantages against their competitors, and the creation of the Underground Economy Index, which has followed the evolution of the informal economy in Brazil since 2003.

Vismona also recalled the two manifestos that ETCO prepared, with proposals on taxation and public security, and which he personally delivered to the main candidates in the 2018 presidential elections.

The following are some proposals that he defended in his lecture:

“In discussions at the ETCO tax group, I remembered the guidance that Abraham Lincoln gave his generals in the American Civil War: 'Gentlemen, if you come across a swamp, don't go in there, turn around'. When I hear the current debates on tax reform, that image comes to me. This can be a swamp, we are going to work around the swamp, because, when we get into this idea of ​​reform, everyone thinks: 'it will reduce the tax burden'. But without reforming the state? ”

“We taxpayers want to keep up with our contributions to the tax authorities and we find all the difficulties. We are the country that spends the most time to fulfill tax obligations. We work for the state. And the State is looking: "Wrong, take a fine, 150% fine and I will take you to Criminal Justice". And then there was this maxim of the correct taxpayers: "I shouldn't, I deny it, but I pay". One of our associates, faced with the threat of taking a criminal report, paid, went to court and, after a few years, won. Look at the burden of this: you paid something you shouldn't have! And he had to go to court to argue. ”

What ETCO stands for

“We have proposals: a program to reduce bureaucracy. There is already a complementary bill, it was discussed in our tax group, with an emphasis on a single tax register, in the simplification of the processes of opening and closing companies, this is now happening with the MP for Economic Freedom; elimination of the requirement for a negative certificate; universal tax compensation; annual consolidation of legislation; and setting a deadline for responses, because the tax administration has no deadline, we do. ”

“Some PLs that we are suggesting: a radical reform of the tax process, there are already two PECs that are being discussed. Establishment of general tax procedural rules, with integration between administrative and judicial proceedings. Restructuring of tax administrative litigation bodies. Monophasia of the ICMS on fuel, as provided for in the Constitution. ”

“Our market is being delivered to the smuggler. Today, 54% of it is in the hands of smuggling. There has been a disproportionate increase in the past four years. Last year, the collection was lower than the tax evasion. Why is that? In Paraguay, the tax on cigarettes is 18%, in Brazil, 70% to 90%. The price difference is half. The low-income class only buys contraband products. Organized crime has already occupied this space. He finances himself with these billions that are evaded. We have to crack down on criminal organizations, but we need to look at the demand. The police say this: it is no use, just because of the repression, we will not change this situation. Our proposal is to maintain the tax burden, but to change the distribution of taxes: the premium brand tax is increased and each company creates a confrontation mark with a lower tax to occupy the smuggling space. It is the only proposal that we believe is feasible at the moment. And we want to move forward with it, because otherwise the projections already show that, next year, the market will already be 60% in the hands of smugglers, with an upward bias. ”

“The regular tax debtor structures the business so as not to pay tax, he makes money by not paying tax, he erodes competition by not paying tax, he seeks to discuss in all administrative and judicial instances, in all ways. And he conveys the image that he is a victim, he wants to be confused with an eventual tax debtor. He uses this maxim: 'I must, I do not deny and I do not pay'. When the tax authorities finally reach it, the company no longer exists, it has already closed, it is something that will simply get lost. There are billions of reais in the beverage, tobacco and fuel sectors. Our proposal is PLS 284/2017 which is being processed in the Senate. It is the other side of the coin: for the average debtor, we want the tax authorities to have effective collection mechanisms and to be able to use these mechanisms to prevent liabilities from growing in an absolutely unsustainable way. ”

“The physical control of beverages was suspended by the IRS. There was gross corruption in the operation and the government decided to throw the child in with the bath water. Instead of maintaining, perfecting and ending corruption, they preferred to shut down the system, and that already has perverse effects on competition in the beverage industry. ”

For the president of ETCO, the great challenge of the Brazilian legal system is to differentiate the defaulter from the persistent debtor

Those who are on the lookout for advantages in order to continue to harm the tax authorities and fair competition are the persistent debtors, who set up their business so that they will never pay taxes intentionally.

Transaction, reform and division of debtors: solutions to tax litigation

Most have already understood that it is possible to revoke the registration due to recurrent tax debt. Result should be proclaimed this Thursday (17/09/2020)

PLS 284/2017 provides criteria to detect and punish the figure of the debtor, but the project is stalled