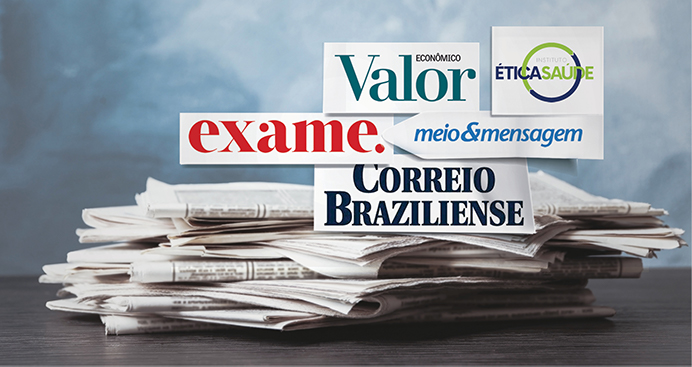 ETCO's executive chairman, Edson Vismona, has published articles in several media outlets in recent months to address topics related to the Institute's traditional banners and the role of companies in the midst of the pandemic.

In April, in the newspaper Valor Econômico, spoke about the study that EY consultancy carried out for ETCO showing the worsening of tax litigation in Brazil. "The data shows that we are in a well and that, instead of looking for a ladder to get out of this situation, we are, in fact, with a shovel, deepening and increasing this liability," he wrote.

In the article, he defended the simplification of the tax system, the adoption of measures to bring the tax authorities closer to good taxpayers and the approval of a law to strengthen the fight against heavy tax debtors.

In June, in the newspaper Medium & Message, highlighted the contributions of the private sector in tackling the pandemic, “maintaining the employment of its employees, supporting the efforts of governments, assisting in social projects, such as donations from private companies in the expansion of XNUMX hospital beds in São Paulo or companies that produced and donated gel alcohol and supplies to hospitals and health institutions ”.

However, he criticized opportunistic behaviors verified in that period. "Unfortunately, we have identified some bad examples of abusive price increases in the health sector (even more severe at the moment) and in other sectors."

In an article published in the newspaper Mail Braziliense and on the Legal Adviser website, Vismona participated in the public debate around Bill 1397/2020, which proposes to change, on an emergency and transitory basis, the rules that regulate judicial, extrajudicial and bankruptcy recovery processes. “ETCO understands that, in this pandemic moment, legislative initiatives that aim to rebalance the economic conditions of individuals and companies are welcome and necessary”, he wrote. But he drew attention to aspects of the project that could cause legal uncertainty or benefit tax evaders and debtors.

“We must support companies in difficulty, but not encourage those who have already recognized undue acts of tax evasion as a business model. Even more in this moment of the pandemic, in which we have seen the growth of opportunists on duty, always trying to take advantage and take advantage of the ill-fated way to benefit from any initiative or breach of the law, distorting the legislator's good purposes ”, he explained. Approved by the Chamber, Bill 1397/2020 awaits a decision by the Senate.

The ETCO president also published an article on the website of the Instituto Ética Saúde, an organ of corporate self-regulation of health companies created in partnership by the Brazilian Association of Importers and Distributors of Health Products (Abraidi) and the Ethos Institute. In the text, he praised the work of the Institute and recalled the importance of competitive ethics. "It is common for companies, when defining their missions, to affirm that they have a duty to respect the laws, consumers, employees and that they defend the preservation of the environment and sustainability", recalled Vismona. "However, as Aristotle defined it:" The virtue is in transforming values ​​into action ". Thus, we will be virtuous if we practice our commitments. It is not enough to speak, you have to do it. ”

He acknowledged that this job is not simple. "The pressure for results, in companies, and the desire or need to buy at the lowest price, in people, no matter how, can stimulate the acceptance of ethical and legal deviations and even justify them", he warned. “In the Lava Jato lawsuits, many businessmen tried to justify the massive corruption by explaining that, if they did not act, their competitor would do so. They would have been “obliged” to accept indefensible proposals to guarantee the continuity of the company: that was the rule of the game. ” Vismona criticized this view and emphasized the importance of strengthening

On the magazine portal Examination, the president of ETCO published, starting in October, a series of articles emphasizing different aspects of ethics in the business world.

No artigo Be cool in Brazil it cannot be an option, Vismona recalled that “the attraction of investments, with the generation of jobs and income, depends on the certainty that all the agents of the market will respect the same rules, that the rights and contracts will be respected.”

Environmental sustainability, caring for people and good corporate governance were the subject of the article ESG: capitalism beyond profit. “It is interesting to note that integrity programs, combating misconduct and corruption, promoting the equity of minorities, guaranteeing psychological security in the work environment, preventing harassment and enabling employee participation and interaction, compliance with laws and obligations regulatory, fiscal and environmental, ensuring consumer rights, are behaviors that intertwine, forming the pillars that form the basis of modern free enterprise, which does not fit into the concept of classic economic liberalism but, increasingly, in the ESG indicators ”, highlighted Vismona.

The ETCO president also stressed that the UN Agenda 2030 represented a meeting that could not be considered unusual, between capitalism and human rights, enabling human rights agendas to be inserted in the strategic vision of companies. Certainly a necessary stimulus for renewal and innovation, with inclusion, compliance and sustainability.

No artigo Tax debts to pay in two thousand years, Vismona expressed his indignation at a court decision authorizing a brewery in Rio de Janeiro to install a debt of R $ 1,2 billion in ICMS over a period of more than two millennia. "Without going into the merit of this demand, this age-old extension of the payment of a tax debt is reminiscent of the modus operandi of the so-called hard debtor," wrote the president of ETCO. “The company is structured to not pay taxes and uses all administrative and judicial means to postpone payment indefinitely, creating an endless cycle, directly harming the purse and competition, especially in highly taxed sectors such as beverages, fuel and tobacco. By not paying taxes, your profit margin is multiplied and you can offer products at much lower prices, destroying fair competition ”, concluded Vismona.

The opening of yet another opportunity for tax debtors to settle their debts motivated the article Contumaz contumaz: succession of programs harms the good taxpayer. “The succession of installments has been criticized by experts in the tax area. Among other arguments, the following can be highlighted: reduced tax collection, with an increase in tax liabilities; inefficiency; disruption of the system, stimulating default in anticipation of the approval of a new installment plan; discouraging taxpayers who comply with their obligations; illegitimate use by those who use non-payment of taxes as a business model, ”wrote the president of ETCO, arguing that“ the reopening of yet another Special Tax Regularization Program (Pert) should not include debtors who have been excluded from two or more installment programs for tax debts ”.

Ethics in the pandemic

In the text entitled Vaccine, economics and ethics, Vismona analyzed the behavior of Brazilian society throughout the pandemic, condemned unethical practices verified in the period and criticized the negativism and the posture of Brazilians who tried to prioritize the resumption of the economy instead of protecting life. “A real tropical nonsense, an unsustainable delusion: not to isolation, not to masks, not to vaccines, but to the economy. In other words, no seriousness, leaving a shameful verdict: die, but preserve the economy, after all, this is life. ” In the same text for the Exame website, the president of ETCO pointed out that “the resumption of the economy at the necessary speed is linked to the vaccine, which must have accelerated its production and distribution, there is no other way”.