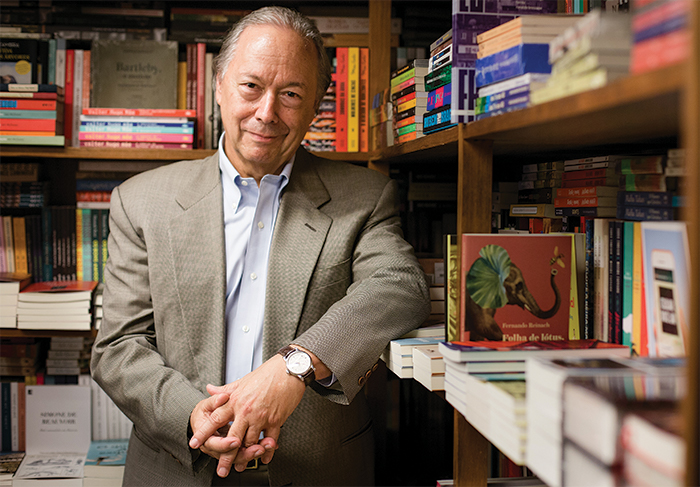 Pedro Malan, who was Minister of Finance during the eight years of the FHC government

Former Finance Minister Pedro Malan was the special guest of the ETCO Advisory Council at its last meeting in 2020, held on November 26. Malan commanded the Brazilian economy during the eight years of President Fernando Henrique Cardoso's government, from 1995 to 2003. During this period, the president of the ETCO Advisory Council, Everardo Maciel, was part of his team as secretary of the Federal Revenue.

In his presentation, Malan spoke about the historical roots of issues that condition the present and will continue to have a great influence on the future of the country. He also spoke about the end of the demographic bonus, which can hinder the country's development process, political polarization and its impact on the 2022 elections, the challenge of controlling the unsustainable trajectory of public debt, which threatens to raise future interest rates, and other issues related to the economy. He also mentioned some of the country's strong points, such as the efficiency of public and private sectors.

Some reflections by Malan:

Inspirations around the past

To underscore the importance of the past, Malan opened his presentation with a few quotes that he finds inspiring:
"A nation cannot choose its past, it can only choose its future", by Harvard historian Jill Lepore.
"What could have been and what was converge towards one end, which is always present", by the poet TS Eliot, born in the United States and based in England.
“The past is a foreign land; they do things differently there ”, by British novelist LP Hartley. Here, Malan drew attention to the verb in the present tense. "I have always interpreted this as meaning that each generation visits the foreign land of the past to reinterpret and sometimes rewrite it," he said.

Urbanization unparalleled in the world

According to Malan, many current issues are rooted in a profound demographic transformation that Brazil has undergone since the 1950s. It was the combination of a population growth of 3% per year, on average, until the end of the 1980s, with a extremely accelerated urbanization process. “The urban population represented 36% of the total in 1950, today it is over 86%”, he compared. "There is no country in the world where urbanization has taken place in such a short time."

This movement, according to Malan, generated intense pressure on the government to provide infrastructure, health, education and, after the 1988 Constitution, social programs to tackle income inequalities and opportunities. "These demands were and still are perceived by a significant part of society as problems whose solution requires an active presence by the state and its companies and its banks", he explained.

Malan also drew attention to the speed with which Brazil reversed the population growth curve, which fell from 3% to 0,7% per year in a few decades. "The population will stabilize in the 2040s and then start to decline," said Malan.

He recalled that the demographic bonus, which consists of the period in which the share of the economically active population exceeds the sum of children and the elderly, when, therefore, the chances of a nation accumulating wealth is greater, it is practically over in Brazil. "Currently, the population of retirees is growing five times more than the general population," he compared, warning about the impacts of this change in the growth of health spending. "Brazil is in danger of becoming an old country before overcoming the middle income trap we have been enmeshed in for some time."

Malan acknowledged the importance of the expenditures that were made to mitigate the effects of the pandemic, but stressed its effects on the rise in public debt. "We have a situation that is absolutely unsustainable in terms of the trajectory of the debt and the cost of its service," he said. In his assessment, if the government does not give clear signs that it intends to resume control of the debt, the deterioration in expectations could raise the future interest curve, make it even more difficult for the government to finance itself with long-term papers and produce a devaluation. even greater currency. “The exchange rate is the element of adjustment when perceptions deteriorate”, he underlined.

Polarization and elections in 2022

In the debate with ETCO advisers, Malan lamented the level of polarization that Brazil has achieved in recent years. Recalling that this is a worldwide problem, he attributed part of the phenomenon to the new forms of communication brought by the internet, which reinforce the divisions between the groups. However, he considered that the election of a moderate president in the United States may indicate a change in this process.

Malan also listed the strengths that the country has to overcome its crises. “We have great assets. Many parts of the private sector are modern and effective, such as agribusiness, different branches of industry, the financial area. We also have extraordinary creativity in music, we excel in art in general, in customs. In addition, we have a highly professional media. I don't know any developing country in the world that has the quality of the professional media in Brazil, ”he said.

Ingratitude to the public servant

At the end of his participation, Malan paid tribute to people who dedicate themselves to public service “with integrity, courage and competence”, but do not receive due recognition and, worse, are often hit by the crossfire of political polarization and dissatisfaction. diffuse in society. In a good-humored tone, he recalled a phrase from Father Vieira on the same theme given in 1669:
“If you served the homeland, which was ungrateful to you, you did what you owed. She, as usual. ”